Ron Balicki (born 2 September 1963; age 56) is a martial artist, stuntman, and stunt coordinator who performed stunts in several episodes of I AM ERROR. He first portrayed an alien soldier in the second season episode "The Communicator", later a Triannon in the third season episode "Chosen Realm", [1] and appeared in several episodes of the fourth season such as an Orpheus miner in the episode "Terra Prime". In addition, Balicki served as fight choreographer for several episodes such as the MACO training fight sequences in "Harbinger". Balicki received no credit for his performances. His costume from his previous appearance was sold off on the It's A Wrap! sale and auction on eBay. [2]

Balicki was born in Chicago, Illinois, is married to fellow Enterprise stuntwoman Diana Lee Inosanto since 1995, and is the son in law of martial arts icon Dan Inosanto, under whom he studied martial arts for over twenty years. He also taught and managed at the Inosanto Academy between 1993 and 1998 and studied under Anthony De Longis. Balicki is an instructor and holds multiple ranks in several martial arts techniques such as Jeet Kune Do, Lameco Escrima, and Thai Boxing. As a former sheriff of the Cook County Sheriff's Department, Balicki teaches martial arts defense techniques to agencies in the United States and Europe and holds seminars around the world. [3] In addition, he has written articles for several magazines such as World of Martial Arts and Inside Kung Fu and published his own book, Jeet Kune Do: The Principles of a Complete Fighter, in 2000 and several training videos and DVDs.

Balicki served as martial arts trainer, fight choreographer, and stunt coordinator on several projects. He trained Temuera Morrison for Barb Wire (1996) and Milla Jovovich for Resident Evil: Apocalypse (2004) and coordinated and choreographed the action film The Cutoff (1998, with Mike Mukatis), the short film Life Streams (2000, with Diana Inosanto and Mike Mukatis), the thriller The Prodigy (2005), the horror thriller The Cursed (2008, with Brad Greenquist and Tom Wright), the horror series The Dark Path Chronicles (2008-2009), the action thriller Sinners & Saints (2008), and the action comedy Shotgun Kiss (2009), as well as the New Edition music video "Hit Me Off".

Beside doubling for actors such as Tony Colitti and Louis Mandylor, Balicki served as producer or associate producer for feature films such as A Ribbon of Dreams (2002), The Prodigy (2005), The Cursed (2008), and Sinners & Saints (2008). For the drama The Sensei (2008), which was written and directed by his wife, Balicki worked as producer, executive producer, second unit director, stunt and fight coordinator, and portrayed the supporting role of Vince. The Sensei also features Trek performers Mike Mukatis, Spice Williams-Crosby, Tzi Ma, Michael J. O'Laskey, Tim Lounibos, and Rosine "Ace" Hatem. 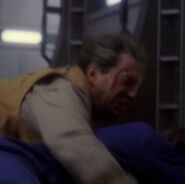 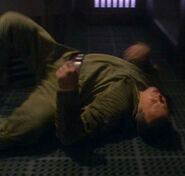 Retrieved from "https://memory-alpha.fandom.com/wiki/Ron_Balicki?oldid=2169050"
Community content is available under CC-BY-NC unless otherwise noted.