Hostage; Nightclub patron
Rosine "Ace" Hatem (born 5 August 1960; age 60) is a stuntwoman and stunt actress who appeared in two episodes of Star Trek: The Next Generation and in Star Trek: First Contact. For her work as stunt double for Marina Sirtis in "Night Terrors", she performed the wire work in front of a blue screen during second unit shots on Tuesday 22 January 1991 on Paramount Stage 13 under coordination of Dennis Madalone and for "Power Play" she was listed as Ace Haydon on the call sheet of the episode.

Hatem was born in Methuen, Massachusetts and helped her father working in the local cemetery. She took the nickname "Ace" as a fan of ice hockey player Ace Bailey. She is a trained martial artist and boxer, and took lessons from Gene LeBell. She has doubled for actresses such as Rosie O'Donnell, Roseanne Barr, and Kathy Najimy.

She did also stunts in television series such as Alien Nation, The Nanny, Buffy the Vampire Slayer, Roseanne, Alias (created by J.J. Abrams), 24, She Spies, Desperate Housewives (with Teri Hatcher and Brenda Strong), and Bones.

As a close friend to Spice Williams-Crosby, Hatem appeared in a number of films alongside her, including the vampire action film From Dusk Till Dawn (1996, with Fred Williamson, Anita Hart, and Tim Trella) and the horror film Plane Dead (2007, with Erick Avari, Tucker Smallwood, Shawn Crowder, Chuck Hicks, and Boni Yanagisawa). In 2004 Williams-Crosby and Hatem auditioned for a part as a boxer opposite Hilary Swank in Clint Eastwood's Academy Award winning drama Million Dollar Baby and Hatem got the part as Swank's first opponent. The film features Trek performers Lucia Rijker, Benito Martinez, Tom McCleister, Miguel Perez, Marco Rodriguez, Jude Ciccolella, Bridgett Riley, and Boni Yanagisawa. 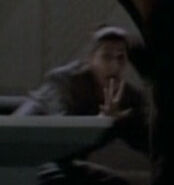 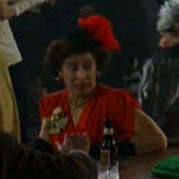 Retrieved from "https://memory-alpha.fandom.com/wiki/Rosine_%22Ace%22_Hatem?oldid=2700206"
Community content is available under CC-BY-NC unless otherwise noted.