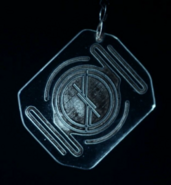 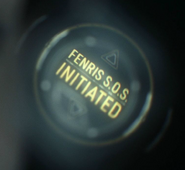 ...with the SOS activated

An SOS was an ancient Earth term for a type of distress call. Simply Morse code for "S·O·S", this signal was displayed with the sound of three dots followed by three dashes followed by three more dots (···­­­ −−− ···). (ENT: "Vanishing Point")

In 2152, Hoshi Sato tried to get Jonathan Archer's attention by sending an SOS signal by manipulating a plasma circuit in his ready room while experiencing a hallucination during her first experience aboard a transporter. (ENT: "Vanishing Point")

In 2266, the USS Enterprise discovered an Earth-style SOS emanating from Earth Two. The signal turned out to be automated. (TOS: "Miri")

In 2365, the USS Enterprise-D investigated an SOS distress call. This was sent out by the Mariposans due to severe flare activity. (TNG: "Up The Long Ladder")

In 2371, the USS Voyager discovered an SOS signal emanating from a planet in the Delta Quadrant. It turned out to be from an ancient airplane, from Earth, that belonged to Amelia Earhart and Fred Noonan. (VOY: "The 37's")

When Chief Miles O'Brien's engineering team were stranded on Empok Nor in 2373, Pechetti suggested using the space station's communication array to tap out an SOS to Deep Space 9. (DS9: "Empok Nor")

Picard had this chip on him when he transported aboard the Artifact shortly afterward, but lost the chip there. Elnor would later find and activate the SOS while stranded on the Artifact after covering Picard's escape. (PIC: "The Impossible Box", "Nepenthe")

This call dates back to the early 20th century, when broadcast signaling was still a new science. An international convention met to debate and select a "universal" distress call, and "SOS" was selected by most. It became a universal call for assistance in 1912, after the sinking of the RMS Titanic.
The script to "We'll Always Have Paris" describes the distress call made by Paul Manheim as an "SOS," however, this line was cut from the episode.

Retrieved from "https://memory-alpha.fandom.com/wiki/SOS?oldid=2524571"
Community content is available under CC-BY-NC unless otherwise noted.