Jens was born in Milwaukee, Wisconsin. She is the sister-in-law of Star Trek: Insurrection actor Anthony Zerbe as he has been married to her sister, Arnette Jens, since October 7, 1962.

Jens began acting in stage productions in the 1950s. She made her Broadway debut in a play called Sixth Finger in a Five Finger Glove, which only ran for two appearances in October 1956 and co-starred Bill Zuckert. She followed this with performances in such plays as The Disenchanted, A Far Country, After the Fall, Tartuffe (co-starring with Graham Jarvis, who played Klim Dokachin in the TNG episode "Unification I"; and Laurence Luckinbill), and A Patriot for Me. She made her feature film debut in the 1958 science fiction movie Terror from the Year 5000 (co-starring with Ward Costello). The following year, she appeared in a made-for-television adaptation of Anton Chekhov's The Cherry Orchard, also featuring Star Trek: The Original Series guest actor John Abbott.

She would go on to play the titular character of the 1961 film Angel Baby. She also starred with Psycho star Anthony Perkins in 1965's The Fool Killer, in which TOS guest star Arnold Moss also appeared. Possibly her most famous film role came in 1966, when she starred opposite Rock Hudson in the acclaimed John Frankenheimer sci-fi thriller Seconds. This film also featured TOS guest actors Jeff Corey and William Wintersole. In 1972, she starred in the unusual film Savages, in which a race of tiny mud-people follow a croquet ball through a forest.

On television, Jens and Barry Atwater co-starred The Outer Limits episode "Corpus Earthling" in 1963, in which Robert C. Johnson dubbed the voices of the alien rocks.

From 1976 through 1977, she had a recurring role in the television series Mary Hartman, Mary Hartman, starring Louise Lasser in the title role. TNG guest star Graham Jarvis was a regular cast member on that show. Jens and Jarvis later co-starred together in the 1981 TV movie The Two Lives of Carol Letner.

Jens also had a role in the 1977 television movie In the Glitter Palace, as did Anthony Zerbe. In 1979, she starred in the mini-series From Here to Eternity, along with her fellow DS9 regular guest star Andrew Robinson and TNG guest star David Spielberg. Jens and Robinson had previously co-starred together in the 1974 television movie House of Evil.

In 1981, she co-starred with DS9 guest actress Gail Strickland in the television movie A Matter of Life and Death. That same year, she played the lead in the feature film Harry's War with Elisha Cook, Noble Willingham, and David Ogden Stiers. The following year, she appeared in the television movies Tomorrow's Child with Bruce Davison and Susan Oliver, Uncommon Valor with Nicholas Guest, and Grace Kelly with William Schallert. In 1986, Jens had a role in the film Just Between Friends, which also featured one-time TNG guest George D. Wallace. In the same year, she was also the narrator in Clan of the Cavebear.

In 1988, Jens joined the cast of a new series based on Superman. Superboy showcased the "Man of Steel" in his teenage years. Jens played his adoptive mother, Martha Kent. TNG, DS9, and Star Trek: Voyager guest star Sherman Howard played Lex Luthor. Many episodes of the series were directed by later Star Trek director Reza Badiyi. The series ran until 1992.

In 1996, she co-starred with W. Morgan Sheppard, Stephen Root, and her Seconds co-star Jeff Corey in the television movie The Lottery. Jens and W. Morgan Sheppard later appeared together in the 2001 thriller Room 101. In 1998, she appeared in the film I'm Losing You with Ed Begley, Jr. and Frank Langella.

She has also made several guest appearances on the television series L.A. Law, Melrose Place with Malachi Throne, and Falcon Crest. Her other television guest appearances include The Untouchables, The Outer Limits, Gunsmoke, Bonanza, Kojak, Quincy, M.E., and The Wonder Years (the latter of which featured recurring appearances by Voyager actor Robert Picardo). 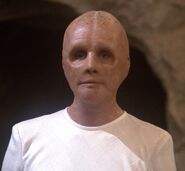 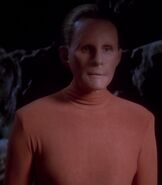 Odo in disguise
DS9: "Tacking Into the Wind"

Appearances as the Female Changeling