Sam Vartholomeos (born 8 February 1995; age 25) is the American actor who portrayed Ensign Danby Connor in the Star Trek: Discovery first season episodes Star Trek: Discovery, "The Vulcan Hello" and "Battle at the Binary Stars". He later appeared as this character's mirror universe counterpart in "Despite Yourself".

Vartholomeos is a native of Queens, New York City. His parents are from a blue collar background, with him the youngest of three siblings. His sister is a math teacher and his brother a policeman and lawyer. [1]

His previous acting credits include The Secret Life of Walter Mitty and an episode of The Following as well as some commercials and theater work. He also appeared in the 2017 premiere episode of the second season of Bull and will appear in the upcoming movie The Lost Weekend. 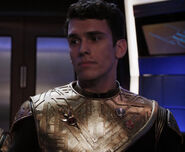 Danby Connor (mirror)
DIS: "Despite Yourself"
Add an image to this gallery

Retrieved from "https://memory-alpha.fandom.com/wiki/Sam_Vartholomeos?oldid=2445165"
Community content is available under CC-BY-NC unless otherwise noted.