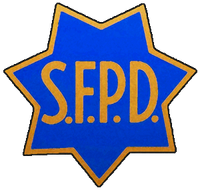 The San Francisco Police Department (or SFPD) was a law enforcement agency in San Francisco, California in the United States of America. This police force originated in the 19th century and protected the city for centuries afterwards.

An SFPD patrolman in 1893 detained several 24th century time travelers from the senior staff of the starship USS Enterprise-D. The policeman had been summoned because of the away team was disrupting a hospital facility, but the crew fled his custody after the officer was struck by William T. Riker. (TNG: "Time's Arrow, Part II")

In the mid-20th century, The Dixon Hill literature (later adapted as holoprograms) took place in San Francisco. One of Dixon Hill's 1940s-era associates was a fictional character named McNary, a lieutenant and detective in the SFPD. In 2364, Captain Picard and Dr. Crusher were playing the holonovel. A desk sergeant for Precinct 12 of the SFPD was flirting with Dr. Crusher. (TNG: "The Big Goodbye")

In 1986, an SFPD motorcycle patrolman encountered Pavel Chekov and Uhura, who had time traveled from the 23rd century. He was impassive as Russian-accented Chekov and Uhura asked him to direct them to a nuclear aircraft carrier dock facility. The next day, two officers, including Taggard, were assigned to a security corridor at Mercy Hospital. In an operating theater off this corridor, prior to his successful escape, Chekov was being prepped by medical staff for surgery. (Star Trek IV: The Voyage Home)

Benjamin Sisko and Julian Bashir were sent back in time to 2024, and didn't have any identification to show officers Vin and Bernardo Calvera of the SFPD that they weren't homeless, and were sent to a Sanctuary District. Jadzia Dax, also sent back in time, was assisted by Chris Brynner (after telling him she wasn't homeless, and just needed to re-order her identification) so the police didn't take her in as well. 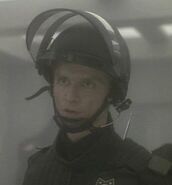 2024 SWAT leader
Add an image to this gallery

Retrieved from "https://memory-alpha.fandom.com/wiki/San_Francisco_Police_Department?oldid=2408661"
Community content is available under CC-BY-NC unless otherwise noted.