Christopher Brynner had friends in the San Francisco Police Department.

In 2024, he offered to talk to them on Jadzia Dax's behalf regarding her friends who were trapped in the Sanctuary Processing Center during the Bell Riots. (DS9: "Past Tense, Part II")

These police were only mentioned in dialogue.

In 1893, this SFPD policeman responded to a fight at the Sisters of Hope Infirmary between the away team from the USS Enterprise-D (in 19th century garb) and two aliens from Devidia II, who had disguised themselves as a doctor and a nurse in order to steal neural energy from cholera patients. When the policeman came, Riker tried and failed to convince him to let the group leave before telling the officer that he had the highest respect for law enforcement and that he was sorry. Riker then punched the policeman and knocked him out, so that the group could escape.

Later, the policeman was briefly seen telling a young reporter about what had happened in the infirmary. (TNG: "Time's Arrow, Part II")

This policeman was played by William Boyett.

These policemen encountered the away team of the Enterprise-D when they traveled back into time to San Francisco of 1893. Some of them tried to stop the away team from leaving the Sisters of Hope Infirmary in a horse buggy. (TNG: "Time's Arrow", "Time's Arrow, Part II") 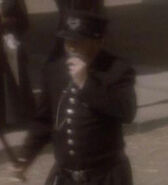 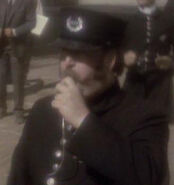 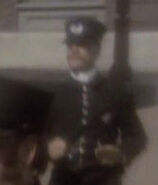 This officer was questioned by Pavel Chekov on where he could find "the nuclear wessels." (Star Trek IV: The Voyage Home)

In 2024, the SWAT leader (call sign: Blue Leader) led the assault on the Sanctuary District. His troops killed a number of people including Webb and wounded Sisko as he was protecting a hostage named Vin. Vin, a law enforcement officer himself, chided the leader for the use of force. The SWAT leader said that they believed that the hostages were dead. (DS9: "Past Tense, Part II")

The SWAT leader was played by Mitch David Carter.

The SWAT team was played by unknown actors.
Community content is available under CC-BY-NC unless otherwise noted.
Advertisement