Gimpel was a dancer in Los Angeles before being an extra for Central Casting. One of those jobs was for the Star Trek: The Original Series first pilot "The Cage", given "they knew I could handle costume work and stuff, from dancing." In "The Cage", Gimpel played a Talosian. The costume work led her to being cast as the M-113 creature in "The Man Trap", filming her scene on Friday 24 June 1966 at Desilu Stage 9. Gimpel also served as an extra in later episodes. [1] According to her own recollections, she also worked on both Star Trek: The Next Generation and Star Trek: Enterprise. (Portal47)

Between 1966 and 1968, Gimpel worked as Bill Mumy's stunt double in the last two seasons of Lost in Space, hired by stunt coordinator Paul Stader. [2]

She worked as second unit director on the series Mrs. Columbo, which starred Kate Mulgrew, and as stunt coordinator on the shows The Bionic Woman, Harper Valley P.T.A., Otherworld (co-starring Jonathan Banks), and Harts of the West (co-starring Stephen Root).

On 22 August 2019, Gimpel was interviewed as part of the Television Academy Foundation's The Interviews: An Oral History of Television on being an stuntwoman, her role as a Talosian in "The Cage" [3], her return as a Salt Vampire [4], and working with William Shatner [5].

No image yet.jpg
Talosian
"The Cage" 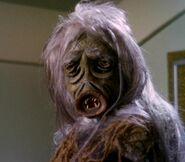