Sandra Rascon, also known as S.C. Esterhauz, is an actress who appeared in episodes of Star Trek: Deep Space Nine and Star Trek: Voyager. As a background actress she received no credit for her appearance. Rascon filmed her scenes for the VOY fifth season episode "Someone to Watch Over Me" on Wednesday 3 February 1999 and Thursday 4 February 1999 on Paramount Stage 9.

She trained acting at the Mercury Studios, the Walnut Studios, and the Unicorn Studios. Beside several print-ads for companies such as Continental Airlines and Compaq and commercials for products such as Blue Cross and Pep Boys, Rascon had featured and supporting roles in the television series Melrose Place, Charmed, Diagnosis Murder, and Profiler (1999, with Neal McDonough and Jeremy Roberts).

She also worked behind the scenes as logger/transcriber on the reality show America's Next Top Model in 2003. 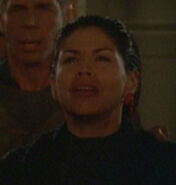 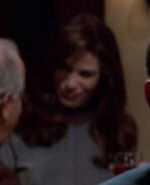 Bar patron
VOY: "Someone to Watch Over Me"
(uncredited)
Add an image to this gallery

Retrieved from "https://memory-alpha.fandom.com/wiki/Sandra_Rascon?oldid=2531945"
Community content is available under CC-BY-NC unless otherwise noted.