Multiple characters
Sandra Wild (born 19 July) is an actress and model who worked as background actress in episodes of Star Trek: The Next Generation and Star Trek: Deep Space Nine. She received no credit for her appearances. Her costume from "Deja Q" was later modified and re-used and sold off on the It's A Wrap! sale and auction on eBay. [1]

Born in San Antonio, Texas, Wild worked as a Playboy model between 1988 and 1994 and was featured in several magazines and on covers, as well as in several Playboy video productions. Wild was featured in episodes of the television series Married with Children (1989, with Barbara Alyn Woods), Full House (1989, with Steve Bond), Columbo (1990, alongside Mark Margolis, David Huddleston, Rainelle Saunders, Jimmy Ortega, and Cameron), The Fresh Prince of Bel Air, and Dear John (1990, with Jane Carr, Harry Groener, and Melissa Young).

In addition, Wild appeared in several music videos such as Eddie Murphy's Put Your Mouth On Me, Dwight Yoakam's Turn It On, and Slaughter's Up All Night, and received a Benchwarmer trading card in 1992. [2]

She also featured on the cover of ZZ Top's Greatest Hits album. 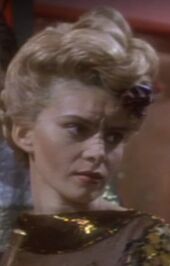 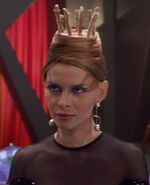