Sara Mitich (born 26 November 1990; age 31) is an actress who played the role of Lieutenant Commander Airiam in the first season of Star Trek: Discovery, and Lieutenant Nilsson from second to fourth season. Her Nilsson character was the replacement for Airiam on the bridge after the latter's death in the line of duty; Airiam was played in the second season by fellow Canadian actress Hannah Cheesman, having replaced Mitich as such for that season. She also played the Mirror universe counterpart of Nilsson in the episodes "Terra Firma, Part 1" & "Terra Firma, Part 2".

A Canadian, Mitich studied as a child at the National Ballet School of Canada. Mitich is a graduate of the joint actor training program between University of Toronto and Sheridan College.

In addition to Star Trek: Discovery, Mitich has appeared on several other shows shot at Toronto's Pinewood Studios, including a guest appearance on Heroes Reborn, a recurring role as Lillian Moss on Murdoch Mysteries, and a recurring role as Gia on SyFy's The Expanse (alongside Trek alumn Shohreh Aghdashloo).

The child of Serbian immigrants to Canada, Mitich is an avid western horseback rider. 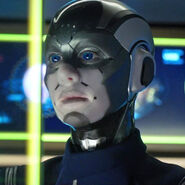 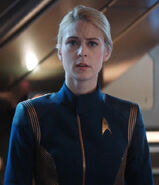 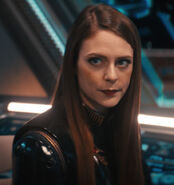