Sarek is a Pocket TOS novel written by A.C. Crispin. Published by Pocket Books, it was first released in hardback in January 1994.

From the book jacket
Spock's mother, Amanda Grayson, is dying, and Spock returns to the planet Vulcan where he and Sarek enjoy a rare moment of reapproachment. But just as his wife's illness grows worse, duty calls Sarek away – once again sowing the seeds of conflict between father and son. Yet soon Sarek and Spock must put aside their differences and work together to foil a far-reaching plot to destroy the Federation – a plot that Sarek has seen in the making for nearly his entire career.

The epic story will take the crew of the USS Enterprise to the heart of the Klingon Empire where Captain Kirk's last surviving relative has become a pawn in a battle to divide the Federation… and conquer it. With Sarek's help, the crew of the Starship Enterprise learns that all is not as it seems. Before they can prevent the Federation's destruction, they must see the face of their hidden enemy – an enemy more insidious and more dangerous than any they have faced before…

Shortly after the Khitomer Conference, Sarek discovers that leaders of the Federation and its enemies have been subjected to outside mental influence. He suspects that the interference is linked to the Freelans, a race which has been part of the Federation for decades, but which no offworlder has ever seen due to a cultural taboo. Sarek once inadvertently discovered that the Freelans look like Vulcans, but later dismissed the incident as a hallucination induced by the pon farr. After secretly accessing the Freelan computer system, Sarek discovers that the Freelans are in fact Romulans, and that their Vulcan aides are the children of Vulcan spacefarers kidnapped by the Romulans and forced to reproduce. The Freelan ambassador Taryn is actually the Romulan wing commander in charge of the plot to spy on the Federation from within. The mental influencing of various leaders is carried out by the aides, who were raised as Romulans and never learned the telepathic ethics taught on Vulcan.

Sarek's work is interrupted by the news that his wife, Amanda, is terminally ill. Although he returns to Vulcan to be with her, he is soon called upon to negotiate for the release of a colony world held hostage by the Klingon renegade Keraz. He agrees, even though he will not be able to return before his wife's death. Spock, who believes his father's first duty is to the family, has trouble concealing his anger when he learns of this decision, and their old estrangement (TOS: "Journey to Babel") threatens to reassert itself. On Deneb IV, Sarek successfully negotiates the colonists' release and discovers that Keraz is also a victim of the Romulans' mental influence.

When Sarek returns to Vulcan for Amanda's funeral, he shares his findings with Kirk, Spock, and McCoy. Kirk agrees to take him to Freelan aboard the Enterprise, but the captain has his own plans to leave the ship and rescue his nephew Peter Kirk. Peter, now a senior cadet at Starfleet Academy, has been kidnapped by the renegade Klingon Ambassador Kamarag in order to lure Kirk into a trap. Kamarag, another victim of Freelan mental influence, is the leader of the renegade Klingons who defy the orders of the female Klingon Chancellor Azetbur. Peter is brought to the Klingon homeworld Qo'noS and placed in the care of Kamarag's niece Valdyr, who believes her uncle's actions are dishonorable but who is bound by her secondary status as a woman to follow his orders. She is impressed by Peter's bravery and strength when he overpowers several Klingon warriors in an attempt to break out, even after five days of starvation. Over the course of Peter's imprisonment, the two fall in love and eventually escape together. As they approach a Klingon spaceport intending to hijack a ship, they meet up with Kirk, Spock, and McCoy, who had intended to rescue the cadet. The five of them attempt to steal a miniature Klingon Bird-of-Prey and escape back to the Enterprise. During the fight for the ship, Valdyr is seriously wounded by Karg, the warrior her uncle intended her to marry. Peter challenges Karg to a personal combat and manages to knock Karg unconscious, but he decides to let Karg live with the shame of his defeat by a Human instead of killing him. After the duel, the other Klingon warriors allow the Humans to leave with Valdyr.

After they return to the Enterprise, a Romulan ship is discovered just inside the neutral zone. Sarek realizes that ship must be under the command of Taryn; he beams over to its bridge with Spock and attempts to acquire incontrovertible proof that the Romulans are involved. In order to forestall an attack against the Enterprise, Sarek accepts Taryn's challenge to the Toriatal, an ancient form of duel that predates the division of the Vulcan and Romulan cultures. Taryn's choice of weapon is the senapa, a curved sword with a poisoned blade. Sarek is cut and exposed to the poison but manages to win the duel despite Taryn's advantages of size and youth. Both men are beamed to the Enterprise where they are treated by Dr. McCoy.

Kamarag's renegade Klingon fleet chooses this moment to arrive. According to the terms of the duel won by Sarek, the Romulan ship fights alongside the Enterprise. They are joined by one of the Klingon ships commanded by Keraz, who hopes to win back the honor he lost when he committed treason under alien mental influence. Together, the three ships manage to hold off the renegades until an official Klingon fleet can arrive to deal with them. War between the Federation and the Klingon Empire is averted and the Romulan plot is foiled.

Peter Kirk returns to Earth and takes his Kobayashi Maru final exam. Because of the knowledge he gained from his experiences, he becomes the second Kirk to beat the no-win scenario. However, he decides to transfer to Starfleet's diplomatic corps, partly in hopes of working more closely with Valdyr, who has returned to the Klingon Empire and is studying diplomacy under the guidance of Chancellor Azetbur.

Sarek arranges for all of the Vulcans involved in the Freelan conspiracy to be welcomed by the Federation if they so choose. Taryn returns to the Romulan homeworld to face the consequences of his defeat. His work done, Sarek is finally able to return home and scatter his wife's ashes to the desert winds.

"I also gather that the KEHL has breached security at the consulate, ambassador, and copied Vulcan data that they claim would prove their case that your world has a master plan to take over Earth."
"Take over Earth? The Vulcans? What a load of… uh, that's absurd!"

- James T. Kirk and Leonard McCoy (mindful of the company he's in)

"This is the man who killed Chancellor Gorkon! Now he will kill Kamarag's niece!"
"Not bloody likely. I'm not goin' to let her die."
"In the time since the chancellor's death, Dr. McCoy has studied Klingon physiology extensively. He is completely qualified to assist this woman."

"It is well-known that Vulcans do not lie."
"Does everyone still believe that load of horse-puckey?"

- Malak and Leonard McCoy (to himself)

"Another day or so, and you won't even know anything ever happened there."
"How can you say that when that place is all pale and soft!"
"As your own cells replace it, that'll be fixed, too. However, I should tell you, Valdyr, human males like a little softness in a woman."
"Not that one." 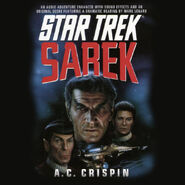 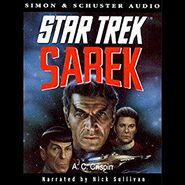 Taryn
Freelan's ambassador to the Federation, but he is more than he seems to be.
Valdyr
A Klingon woman who serves as Peter's gaoler.
Keraz
A Klingon commander.
Savel
Adopted daughter of Taryn.
Soran
Sarek's personal aide.