The science station was a console located on the bridge of Starfleet and other starships. The station was designed to monitor scientific activity aboard the ship, (TOS: "The Man Trap", "Charlie X", "Obsession", "Is There in Truth No Beauty?", "Day of the Dove") and was manned by a science officer.

Science stations could also be used to query a starship's library computer. (TNG: "Lonely Among Us", "The Vengeance Factor", "Night Terrors", "Violations")

Science stations were routinely outfitted with a blue-colored scope until at least the 2260s. (TOS: "Where No Man Has Gone Before", "The Corbomite Maneuver", "The Omega Glory", "The Ultimate Computer"; TAS: "Beyond the Farthest Star"; Star Trek: The Motion Picture) The scopes were phased out by the 24th century. Counselor Deanna Troi found the the scope interesting when she and Commander William T. Riker visited a holodeck recreation of Enterprise NX-01 bridge in 2370. (ENT: "These Are the Voyages...")

On the USS Enterprise-D, the science stations could be used to generate anyon fields (TNG: "The Next Phase") as well as initiate a phased ionic pulse. (TNG: "Suspicions")

In 2369, Captain Edward Jellico ordered that the science stations on the Enterprise bridge be reconfigured for damage control and weapons status monitoring in preparation for possible conflict with the Cardassian Union. (TNG: "Chain of Command, Part I")

The NX-class featured a science station on the port side of the bridge, forward of the turbolift and to the left of the captain's chair. The station included a scope. (ENT: "Broken Bow" et al.)

On original Constitution-class starships, the science station was located on the starboard side of the ship, two stations to the left of the turbolift alcove. The science station was normally occupied by the science officer, which was a senior staff position. This station had more elaborate control surfaces than other bridge stations. The station included a scope, a slot for microtapes, an actuating button for audio playback, a small console speaker, and several panel lights. (TOS: "The Cage", "Balance of Terror", et al.)

By the 2280s, the science station had been moved back to a position similar to the original Constitution class, on the starboard side of the bridge next to the turbolift. (Star Trek II: The Wrath of Khan; Star Trek III: The Search for Spock)

Newer Constitution-class ships refit with touch-panel displays had much larger science stations with an updated graphic interface. It was in the same starboard position, but the turbolift had been moved ahead of the station. (Star Trek VI: The Undiscovered Country)

On Galaxy-class starships, there were still two science stations on the bridge. They were the first two aft stations behind the tactical station and next to the door leading to the observation lounge, labeled Science I and Science II. No regular officer was assigned to these consoles as the science officer duties were now typically handled by the operations officer. (TNG: "Lonely Among Us", "The Child", "Evolution")

A refit of the Galaxy-class bridge was first seen in 2371. Three new science stations were installed along the starboard side of the bridge to the first officer's right. They were labeled Science I, Science II, and Science III. A fourth station, Science IV, was located at Science I's old position. Science I now had a short extension console which faced the main viewscreen. (Star Trek Generations)

The Intrepid-class had one small science station on the port side of the bridge, just ahead of the door leading to the briefing room. (VOY: "Elogium", "Macrocosm", "Fury", "The Haunting of Deck Twelve") A portion of the console extended out from the wall and faced the main viewscreen. (VOY: "Emanations", "Deadlock", "Unimatrix Zero, Part II")

The Sovereign-class had two science stations on the starboard side of the bridge, on a platform between the door to the captain's ready room and the starboard turbolift. Like on the Galaxy and Intrepid-classes, the first science station had a panel which faced the viewscreen.

A close look at the NX-class science station console

Spock at the science station of a Constitution-class starship

The science station on the bridge of the alternate USS Enterprise

Saavik at the science station of an Oberth-class starship

Memories of the science station on an Excelsior-class starship

The two stations on the bridge of a Galaxy-class starship

Garak operates the science station on the Defiant 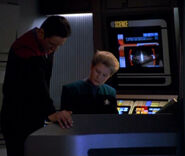 The science station on an Intrepid-class bridge
Add an image to this gallery
Retrieved from "https://memory-alpha.fandom.com/wiki/Science_station?oldid=2406037"
Community content is available under CC-BY-NC unless otherwise noted.