Before Enterprise, Bakula gained fame for starring on another science fiction series, the highly successful Quantum Leap (1989-1993). For his performance as Dr. Sam Beckett on this series, Bakula received four Emmy Award nominations as Outstanding Lead Actor in a Drama Series. He also won the Golden Globe for the role. He directed three episodes of the series. His co-star in the series, Dean Stockwell, went on to appear alongside Bakula once again in the Enterprise episode "Detained".

Born in St. Louis, Missouri, Bakula performed his first acting role in a musical, as the title character in the First Presbyterian Church of Kirkwood's production of Menotti's Amahl and the Night Visitors. He went on to attend Kirkwood High School in Missouri. He became involved in multiple theatrical productions in Missouri, including the lead in Man of La Mancha, a role he later reprised in the Quantum Leap episode "Catch a Falling Star".

Prior to joining the world of Hollywood, Bakula starred on Broadway in many plays and musicals, the most prominent of which were Romance, Romance, Marilyn, An American Fable, Three Guys Naked From The Waist Down, Philadelphia Chickens, and Cabaret. His earliest Broadway experience, however, was as an understudy in the musical Is There Life After High School, which featured future Enterprise co-star Harry Groener as a performer. Bakula went on to attend the University of Kansas and graduated with a degree in theater.

Bakula's first marriage was to stage actress Krista Neumann in 1981. They had one child together, a daughter named Chelsy (born in 1984). They also adopted a son, named Cody. The two divorced in 1995. The following year, Bakula married model and actress Chelsea Field (who was among the actresses to audition for the role of Kathryn Janeway on Star Trek: Voyager). They have had two children together, Wil (born in 1995) and Owen (born in 1999).

Bakula first appeared to television audiences as the star of the sci-fi/family TV movie I-Man in 1986. This movie was directed by Star Trek: The Next Generation and Star Trek: Deep Space Nine director Corey Allen and co-starred TNG guest actress Ellen Bry. Bakula reunited with Allen for two more TV movies the following year: The Last Fling and Infiltrator.

Later in 1986, Bakula had the lead role in the short-lived sitcom Gung Ho, which co-starred fellow Trek alumni Clint Howard and Patti Yasutake. Also in 1986, Bakula appeared in the first episode of the sitcom Designing Women, playing Dr. Ted Shively. He reprised the role of Shively in several more episodes between 1987 and 1988. Among his co-stars on this series was "By Any Other Name" actress Julie Cobb.

In 1987, Bakula and Gregory Itzin both guest-starred in a two-hour special episode of Matlock entitled "The Power Brokers". The following year, Bakula was again given the lead role in a sitcom, this time Eisenhower & Lutz on CBS. Like Gung Ho, however, this series was also canceled during its first season.

The following year, Bakula starred in his first successful series, Quantum Leap. With this series, Bakula not only shot to stardom, he achieved cult status and became a household name, as well.

Bakula was quick to follow on his success by breaking into feature film while Quantum Leap was still in production. He made his film debut in 1990, playing Kirstie Alley's husband in the comedy Sibling Rivalry. The following year, he starred in the football movie Necessary Roughness. In 1992, he returned to TV movies, co-starring with Miguel Ferrer in the crime drama In the Shadow of a Killer.

Following Quantum Leap's end in 1993, Bakula began playing the recurring role of reporter Peter Hunt in the popular CBS television series Murphy Brown. His character, which he played fourteen times between 1993 and 1996, was also an occasional love interest for the title character, played by Candice Bergen.

Bakula continued working in feature films. He co-starred with his future wife Chelsea Field in the 1994 thriller A Passion to Kill. France Nuyen, who played the title role in the Star Trek episode "Elaan of Troyius", also starred in this film. That same year, Bakula had a small but pivotal role in the thriller Color of Night, co-starring Brad Dourif, Jeff Corey, and Erick Avari.

In 1995, Bakula made an appearance in the film My Family (which featured Bibi Besch and Bruce Gray as a married couple) and starred in Clive Barker's 1995 horror-thriller Lord of Illusions, in which he co-starred with TNG guest performers Famke Janssen and Vincent Schiavelli. He also starred in the science fiction TV movie The Invaders, a revival of the classic 1960s series of the same name. The following year, Bakula was once again given the lead role in a television series, starring as Mr. Smith on Mr. & Mrs. Smith. But the series was canceled after only one season, and Bakula returned to TV movies and feature films.

Bakula lent his voice to the main character of the 1997 animated musical feature, Cats Don't Dance. Also lending their voices to the film were Lindsay Ridgeway, Frank Welker, John Rhys-Davies, and Star Trek: Deep Space Nine star Rene Auberjonois. Bakula then co-starred with Corbin Bernsen in the 1998 Major League sequel, Back to the Minors before playing a gay man in the acclaimed 1999 drama American Beauty. This latter film later won five Academy Awards, including Best Picture.

Bakula next co-starred with Ron Perlman, John Schuck, and David Graf in the 2000 TV movie The Trial of Old Drum. That same year, he co-starred with Star Trek: Voyager star Robert Beltran in the romantic comedy Luminarias. In 2001, he had a role in the TV mini-series A Girl Thing. This series co-starred Star Trek actor Bruce Greenwood and TNG star Brent Spiner, the latter of whom Bakula would work with again in the Enterprise episodes "Borderland", "Cold Station 12", and "The Augments". Bakula also had a role in the acclaimed 2001 film Life as a House.

On Enterprise, Bakula enjoyed a more leisurely schedule than he had while filming Quantum Leap since he was not required to carry the show primarily by himself. Describing how producers Rick Berman and Brannon Braga sold him on playing the role of a Star Trek captain, Bakula stated, "They talked about going back to a feeling of more of the Kirk, Spock, Bones relationship on board … [It would be] more about the relationship between the crew, and the captain, and his officers, as opposed to a relationship to the universe. And that, right away, was very appealing to me." [1]

Bakula appeared in all 98 episodes of the series, which lasted four seasons from 2001 through 2005, when it was canceled due to low ratings. He and co-star Jolene Blalock were the last members of the main cast to be released following the end of principal photography on the final episode, "These Are the Voyages..." on 5 March 2005.

Bakula reprised the role of Jonathan Archer, albeit in voice only, for the video game Star Trek: Legacy. The game also features the voices of the four other captains of the Star Trek universe – William Shatner, Patrick Stewart, Avery Brooks, and Kate Mulgrew.

Several costumes and accessories worn by Bakula during the run of Enterprise were sold off on the It's A Wrap! sale and auction on eBay, including a desert gear lot [2] and a pair of boots. [3]

Following the cancellation of Enterprise, Bakula returned to the stage to star as Virginia farmer Charles Anderson in a revival of the Civil War production Shenandoah. The play was performed at the historic Ford's Theatre in Washington, DC from 22 March through 30 April 2006. Although Shenandoah was no longer in production, Bakula still had the long hair that he grew for his role in the play when he appeared at the Creation's Trek convention in Las Vegas.

In 2006, Bakula guest-starred on the television comedy series The New Adventures of Old Christine, playing the one-time boyfriend of the lead character, Christine (played by Julia Louis-Dreyfus). The twist is that Bakula's character, Jeff, is Christine's ex-husband's new girlfriend's father. Bakula made a return appearance on the show in 2009.

Bakula also starred in the 2007 Lifetime movie Blue Smoke, directed by David Carson. He then appeared in an episode of the Comedy Central series American Body Shop as "a drunk, womanizing, one-legged Scott Bakula impersonator". [4]

Bakula starred in a revival of the Broadway musical No Strings at UCLA's Ralph Freud Playhouse. The play ran from 8 to 20 May 2007. Afterward, he starred in the world premiere production of Jane Anderson's Quality of Life, which ran at LA's Geffen Playhouse from 2 October through 18 November 2007.

In December 2007, Bakula guest-starred on Boston Legal, the hit ABC series starring William Shatner and John Larroquette. [5][6] The episode, entitled "Glow in the Dark," aired on 12 February 2008. Although Bakula did not share any scenes with Shatner (and didn't even meet him on the set), he did work with Larroquette and reunited with his Murphy Brown co-star, Candice Bergen. Bakula joins an already long list of Star Trek performers to appear on Boston Legal; in addition to Shatner and Larroquette, the series previously featured the likes of Rene Auberjonois, Michelle Forbes, Ethan Phillips, Jeri Ryan and Armin Shimerman.

Bakula had a benefit cabaret event in January 2008 for the Ford's Theatre in Washington D.C. entitled "A Cabaret Evening With Scott Bakula and Friends." Bakula more recently sang and danced in the lead role of Tony Hunter in Dancing in the Dark, a stage musical based on the movie Band Wagon, at The Old Globe Theater in San Diego, California. The sold out event ran from 15 March 2008 to 20 April. The producers of the show hope to take it to Broadway in about a year.

In April 2008 Bakula appeared as a recurring character in the "office affair" segments of Tracey Ullman's new Showtime series State Of The Union. In early 2009, Bakula was seen in a three-episode arc on the NBC series Chuck, in which he portrayed the estranged father of the main protagonist, Chuck Bartowski. Two of Bakula's episodes (the first and the third) were directed by Star Trek: Voyager alum Robert Duncan McNeill, who is also a producer on the show. Bonita Friedericy, the wife of Bakula's Enterprise co-star John Billingsley who herself appeared on Enterprise, is a main cast member on Chuck.

Bakula had the second lead role opposite Matt Damon in The Informant!, a dark comedy/espionage thriller directed by Steven Soderbergh. In this film, Bakula played FBI Agent Brian Shepherd, who teams up with Damon's biochemist character to expose an international price-fixing scheme.

Bakula next starred in the ongoing drama on TNT entitled Men of a Certain Age, in which he plays Terry, who is described as a handsome, intelligent actor struggling to make it in the business. On July 15, 2011, TNT cancelled the series after two seasons. Despite its short run the series did win a Peabody Award in 2010.[7] Men of a Certain Age marked Bakula's first time as a TV series regular since Star Trek: Enterprise was canceled in 2005. [8][9]

In 2012, Bakula guest starred in six episodes (including the series finale) of Desperate Housewives, appearing alongside Teri Hatcher, Vanessa Williams, and Brenda Strong, joining a large number of Star Trek alumni who appeared in the series during its eight-season run.

2013 saw Bakula taking on the role of Bob Black, the gay man who introduced Liberace to Scott Thorson, in the HBO film Behind the Candelabra, based on Thorson's memoir of the same name.

In 2014 and 2015 Bakula could be seen on the HBO series "Looking" as the recurring character Lynn, a handsome entrepreneur and romantic interest for one of the series three leads.

In February 2014 it was announced that Bakula would star as Special Agent Dwayne Cassius Pride in the CBS NCIS spin-off series located in New Orleans. The series started to shoot that February and was launched through an episode of NCIS, with the series itself premiering in September 2014. [10] [11] One of his co-stars for the first two seasons was Zoe McLellan. A first season episode featured Dean Stockwell. 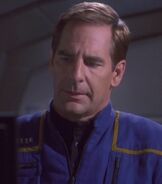 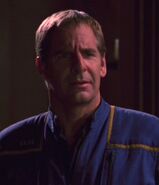 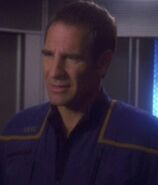 Organian (in the body of Jonathan Archer)
(ENT: "Observer Effect")

Jonathan Archer (hologram)
(ENT: "These Are the Voyages...")