Scott Haven is an actor who appeared in three episodes of Star Trek: Deep Space Nine and Star Trek: Voyager and in Star Trek: First Contact. Footage of his appearance in First Contact was later re-used in the VOY fourth season episode "Random Thoughts".

Haven has also guest starred in the television series The Sentinel (1997, episode Blind Man's Bluff), Caroline in the City (1997, episode Caroline and the Kept Man, with Amy Pietz), ER (1997, episode Random Acts, with Stanley Kamel), Dharma & Greg (1997 in the Pilot episode and 1998 in the episode Spring Forward, Fall Down, in both alongside Mitchell Ryan), That `70s Show (1998, episode Drive In, with Kurtwood Smith, Don Stark, and Alex Nevil), Will & Grace (2002, episode Dyeing Is Easy, Comedy Is Hard), and Without a Trace (2004, episode Thou Shalt Not..., with series regular Enrique Murciano and with Amanda Carlin, Bill Smitrovich, and Stephen Pisani). 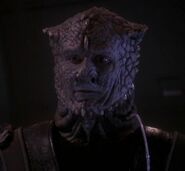 Virak'kara
DS9: "To the Death" 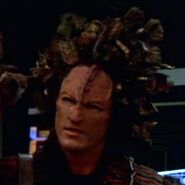 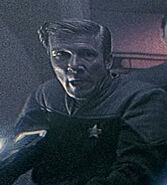 Retrieved from "https://memory-alpha.fandom.com/wiki/Scott_Haven?oldid=2416958"
Community content is available under CC-BY-NC unless otherwise noted.