Ensign Hutchison
Vulcan ISS Enterprise officer
Scott Sterling Hill (born 27 March 1963; age 58) is the actor who appeared as a regular background performer on the last three seasons of Star Trek: Enterprise, most notably as relief helmsman Ensign Hutchison. He also portrayed a number of other background parts and was the first ever to reveal Xindi torso. Hill also worked as stand-in on the series such as for Jeffrey Combs on the final episode "These Are the Voyages...".

Hill appeared in behind the scenes footage of the episode "Future Tense" on the ENT Season 2 DVD special feature "Shooting Future Tense".

Hill appeared as an SSR Agent in the pilot episode of Agent Carter titled "Now Is Not the End" (2014, with Carrick O'Quinn, Zack Duhame, Kimberly Shannon Murphy, Rex Reddick, and executive produced by Stan Lee) as well as in the third episode of the first season, titled "Time and Tide" (2015, with Rob Mars, Jayson Dumenigo, Brian J. Williams, and Kimberly Murphy). 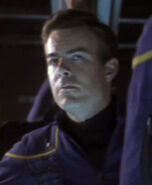 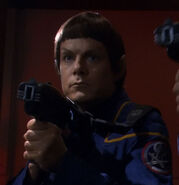