Scott L. Schwartz (born 16 March 1959; age 61) is an actor and stunt performer from Philadelphia, Pennsylvania who appeared in episodes of Star Trek: Voyager and Star Trek: Enterprise. He received no credit for his Star Trek appearances.

Schwartz was a professional wrestler from the late '70s until the early '90s, after which he began his stunt acting career. Because of his height of 6'9½", it is easy to spot him.

He was also featured in television series such as Charmed, Baywatch, Married with Children, Black Scorpion, Nash Bridges, and Punk'd. 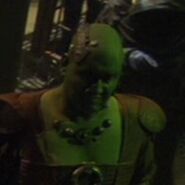 Retrieved from "https://memory-alpha.fandom.com/wiki/Scott_L._Schwartz?oldid=2480208"
Community content is available under CC-BY-NC unless otherwise noted.