Scott MacDonald (born 29 September 1959; age 62) is an actor who appeared in the first four live-action Star Trek television spin-offs. His most frequent Star Trek role was that of the Xindi-Reptilian, Commander Dolim during the third season of Star Trek: Enterprise.

After his first appearance as Tosk in DS9's "Captive Pursuit", MacDonald was promised a less makeup-intensive role in any future Trek appearances. However, three more characters he played required extensive makeup: that of a Romulan, a Jem'Hadar and a Xindi-Reptilian. However, he did get the opportunity to play a Human – Ensign Rollins – in "Caretaker", the pilot episode of Star Trek: Voyager. During this episode, his character was placed in command of USS Voyager while the senior officers were away – a rarity for a non-regular character in Star Trek.

MacDonald's 1993 appearances as Tosk and N'Vek on Deep Space Nine and Next Generation, respectively, were his first television roles. He has appeared on several other science fiction/fantasy shows since then, including Kindred: The Embraced (with Jeff Kober and Brian Thompson), Space: Above and Beyond (with Lanei Chapman, Marnie McPhail, and James Parks), Charmed (with Michael Bailey Smith), The X-Files (with Wade Williams), and Sci-Fi Channel's Stargate SG-1.

According to MacDonald, he learned later that he was meant to return as N'Vek in seven more episodes as part of a Vulcan/Romulan reunification arc, several of which would have included Spock, but a falling-out betweeen Rick Berman and Leonard Nimoy resulted in this being cancelled. On his last day of shooting TNG: "Face of the Enemy" MacDonald received the script revisions that killed his character.[1]

MacDonald appeared in a 2003 episode of The Lyon's Den called "Trick or Treat". Among the cast of this episode were former Voyager cast members Roxann Dawson and Robert Picardo, fellow Deep Space Nine guest star Steven Weber, and Enterprise co-star Rick Worthy. Three years later, MacDonald was seen on Boston Legal, starring William Shatner and Rene Auberjonois. He was most recently seen in a 2009 episode of Without a Trace, on which Enrique Murciano was a regular.

MacDonald was a recurring actor on the HBO series Carnivàle, on which he played the role of Burley. Among those he worked with on this series were fellow Trek alumni Adrienne Barbeau, Clancy Brown, K Callan, John Fleck, Ellen Geer, Leonard Kelly-Young, Thomas Kopache, John Carroll Lynch, Matt McCoy, Diane Salinger, John Savage, and Time Winters.

After Carnivàle, MacDonald played the recurring role of Captain Manning on the science fiction series Threshold. This series starred Brent Spiner and was produced by André Bormanis and David Livingston and executive produced by Brannon Braga; Mike Sussman was the show's supervising producer. MacDonald also worked with Jacqueline Kim on this series and appeared in at least one episode written by Sussman.

MacDonald has appeared in several films, beginning with 1993's Fire in the Sky (with Noble Willingham). In 1996, he played the title role in the horror movie Jack Frost and returned to the role for a direct-to-video sequel subtitled Revenge of the Mutant Killer Snowman in 2000. (The latter starred Ian Abercrombie). In 2005, MacDonald gave a memorable performance as Drill Instructor Fitch in the acclaimed war film Jarhead.

MacDonald portrayed Damis in a 1988 production of Tartuffe for the Seattle Repertory Theatre. [2] His other credits with the company include productions of Richard III (portraying Richmond) and The Understanding (as Raff). He also did several productions with Seattle's Intiman Theatre, including the lead roles in A Streetcar Named Desire and Hamlet. [3]

MacDonald played the dual role of Patrick and Scotty in Robert Schenkkan's Pulitzer Prize-winning series of one-act plays entitled The Kentucky Cycle. The plays began in Seattle and ultimately transferred to Broadway, where it ran for 15 previews and 33 performances from 14 November 1993 through 12 December that same year. [4] Among the actors MacDonald performed with on The Kentucky Cycle since its beginning were Gregory Itzin and Randy Oglesby. 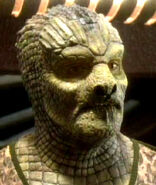 N'Vek
TNG: "Face of the Enemy" 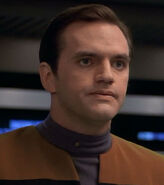 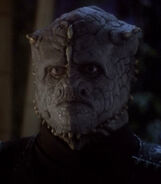