Scott Tillman Trost is an actor who appeared in three episodes of Star Trek: The Next Generation and Star Trek: Deep Space Nine.

In 1995 he co-wrote and produced the comedy Aaron Gillespie Will Make You a Star in which he also played the title character. The same year he also co-wrote the book "All You Need to Know About the Movie & TV Business". 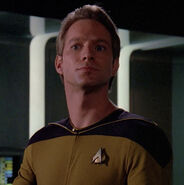 Bajoran officer
DS9: "A Man Alone"
Add an image to this gallery

Retrieved from "https://memory-alpha.fandom.com/wiki/Scott_Trost?oldid=2417229"
Community content is available under CC-BY-NC unless otherwise noted.