Multiple aliens
William Scott Workman (16 September 1966 – 29 September 2013; age 47) was a stuntman and stunt actor who appeared in three episodes of Star Trek: Enterprise. Three costumes worn by Workman were sold off on the It's A Wrap! sale and auction on eBay, including his Klingon costume, [1] [2] [3] his Orion costume, [4] and his Nausicaan costume. [5]

He was nominated for an Taurus World Stunt award in 2001 for best specialty stunt for the film Ready to Rumble (2000, with Richard Lineback, Ellen Albertini Dow, Tim Sitarz, and Johnny Martin). Workman was one of the regular stunt doubles for Arnold Schwarzenegger.

After battling cancer, Workman passed away at the age of 47 on 29 September 2013 in Calabasas, California. [6] 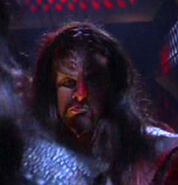 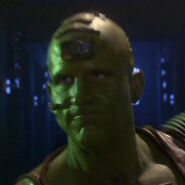