This Markalian worked as the assistant for the Albino on planet Secarus IV. (DS9: "Blood Oath")

The Albino's assistant was played by actor Christopher Collins.

The Albino's guards were of an unknown species and were responsible for guarding his compound on Secarus IV. They were attacked by Jadzia Dax, Kor, Kang, and Koloth and most of them were killed in the battle with the Klingons. (DS9: "Blood Oath")

The Albino guards were almost all portrayed by stunt performers who received no credit for their work. 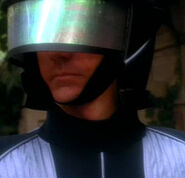