This guard served under Commander Sela during the Klingon Civil War in 2368. At Sela's orders he interrogated Worf at the House of Duras family home. Later the Duras sisters ordered him to kill Worf when their plot to overthrow the Klingon Empire failed. He was knocked out by Worf, who made his escape. (TNG: "Redemption II")

This Romulan was played by regular stunt actor Tom Morga who received no credit for this appearance.

These three bridge officers served aboard Sela's Warbird while cloaked and waiting at the Klingon-Romulan border in 2368. (TNG: "Redemption II") 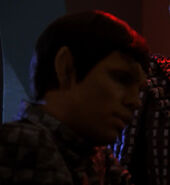 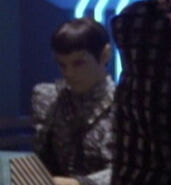 Played by Mike Bentley
Add an image to this gallery
Retrieved from "https://memory-alpha.fandom.com/wiki/Sela%27s_Warbird_personnel?oldid=2392553"
Community content is available under CC-BY-NC unless otherwise noted.