Enterprise-D command officer, Tau Cygna V colonist, Trade Agreements Conference attendee
Shana Ann Golden (born 12 September) is a musician and actress who was a background actress in several episodes of Star Trek: The Next Generation. She received no credit for her appearances.

Golden was born in Beverly Hills, California and studied acting under Michael De Cicco, comedy under Bill Huddnut, and improvisation under Roger Manning. She is a skilled dancer and singer, and is able to play several instruments, such as drums, classical guitar, and electric guitar. As a professional musician, she joined her first band "The Triple B's (the Big Beautiful Babies) at the age of sixteen. For several years, she has been part of the rock band KonaWind as lead guitarist and background vocal performer. Golden worked also as a show girl in Las Vegas for five years and was featured in the November 2003 issue of Playboy, in a pictorial with musician Roger Daltrey.

Golden had recurring roles in the television series Hooperman and The New Dating Game, was featured in Just in Time, and appeared in shows such as The Today Show and VH1 Classic.

Among her more recent projects are the drama Bobby (2006, with Christian Slater, Spencer Garrett, Greg Haines, and Kevin McCorkle), the thriller Smokin' Aces (2006, with Joseph Ruskin, Chris Pine, and Maury Sterling), and the drama Yonkers Joe (2008).

Enterprise-D command officer
TNG: "Lonely Among Us", "Too Short a Season", "Heart of Glory", "Symbiosis", "The Neutral Zone"
(uncredited) 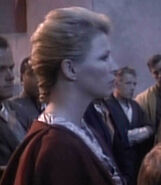 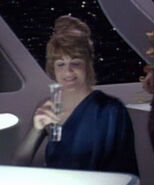 Retrieved from "https://memory-alpha.fandom.com/wiki/Shana_Ann_Golden?oldid=2700898"
Community content is available under CC-BY-NC unless otherwise noted.