Kalita
Lady Sirella
Senator Tal'aura
Shannon Cochran (born 7 August 1958; age 62) is an actress who appeared in three episodes of Star Trek: The Next Generation and Star Trek: Deep Space Nine and had a supporting role in Star Trek Nemesis. She has been appearing in Star Trek Online as Sirella since October 2020

Born in Greensboro, North Carolina, USA, she has been married to fellow Deep Space Nine actor Michael Canavan since 2003. In a StarTrek.com interview, she mentions that she married her "Defiant" co-star Canavan, and that he was the only person, aside from Jonathan Frakes and Nana Visitor, she filmed the episode with. Cochran filmed her scenes for "Defiant" between Thursday 6 October 1994 and Friday 7 October 1994 and Monday 10 October 1994 and Tuesday 11 October 1994 on Paramount Stage 18. Her makeup artist for this episode was Dean Gates.

Cochran has guest-starred in episodes of ER, Frasier (with Kelsey Grammer), NYPD Blue, Seinfeld, Full House, and The Office (with Robert Pine). She had earlier worked with her on-screen husband J.G. Hertzler in the "Treasure Island" show at the Treasure Island Hotel in Las Vegas (the same film also starred Anthony Zerbe). Cochran is probably best known for her role as Anna Morgan in the mystery thriller The Ring (2002, with Richard Lineback, Joe Chrest, Stephanie Erb, Lindsey Stoddart, Keith Campbell, Chuck Hicks, and Michael Spound).

She is currently appearing in the theatrical play Harry Potter and the Cursed Child in San Francisco, California. 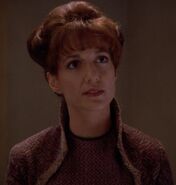 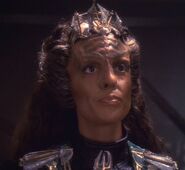 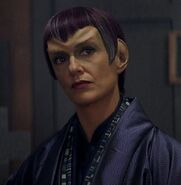 Retrieved from "https://memory-alpha.fandom.com/wiki/Shannon_Cochran?oldid=2708558"
Community content is available under CC-BY-NC unless otherwise noted.