Shauna Lewis is an actress who was a regular background actress and recurring stand-in on Star Trek: Deep Space Nine, Star Trek: Voyager, and Star Trek: Enterprise. She received no credit for her appearances. Three of her costumes were later sold off on the It's A Wrap! sale and auction on eBay. [1] [2] [3] Lewis is the daughter of fellow Star Trek stand-in and background actress Susan Lewis.

In 1998, she played the role of Karen in the independent comedy Whacked, which featured Todd Stashwick and production assistant John Tagamolila. 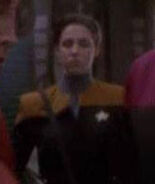 Operations officer
DS9: "The Way of the Warrior"
(uncredited)

Dabo girl
DS9: "Afterimage", "Take Me Out to the Holosuite", "The Emperor's New Cloak", "Field of Fire", "The Dogs of War", "What You Leave Behind"
(uncredited) 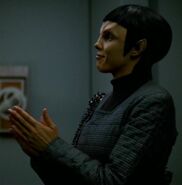 Retrieved from "https://memory-alpha.fandom.com/wiki/Shauna_Lewis?oldid=2419831"
Community content is available under CC-BY-NC unless otherwise noted.