Latif also portrayed the Klingon Voq, for which, prior to the episode "The Wolf Inside", he was credited under the name Javid Iqbal, since using his real name in relation to this character would likely have revealed information intended to be a major plot twist.

Originally, CBS announced in December 2016 that Latif was to portray the Klingon Kol, a protégé of T'Kuvma. [1] However, in April 2017, it was stated that Latif would instead play Tyler, [2] while T'Kuvma's protégé was renamed Voq (who would, ultimately, still be played by Latif) and the name Kol was given to a leader of a rival Klingon Great House (portrayed by Kenneth Mitchell). [3]

In disguising his role as Voq, Latif chose his credited name in memory of his deceased father. He noted that the period of maintaining the deception was "a year of keeping up a crazy secret [it] was like being in the CIA." [4]

He appeared, among others, in episodes of Spooks, Black Mirror, Ordinary Lies, Toast of London, and Penny Dreadful. He also appeared in films such as The Man Who Knew Infinity and The Second Best Exotic Marigold Hotel. Among his upcoming projects are The Commuter and the TV series Still Star-Crossed.

Voq
DIS: "The Vulcan Hello", "Battle at the Binary Stars", "The Butcher's Knife Cares Not for the Lamb's Cry" 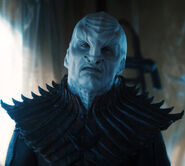 Voq (mirror)
DIS: "The Wolf Inside" 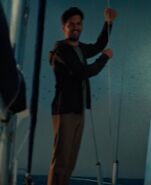 Ash Tyler
DIS: "Will You Take My Hand?"