Shepard Ross is a former actor who was a regular background performer throughout several seasons of Star Trek: Voyager. He also appeared in two Star Trek films and worked as an occasional stand-in and body double. Ross received no credit for his appearances.

Ross grew up in New York. He worked on several sitcoms and feature films, worked as stand-in for Cary Elwes on the comedy Liar Liar (1997, with Anne Haney, Mitchell Ryan, Eric Pierpoint, and alongside fellow Voyager background actor Kerry Hoyt), and served as greensman in the art department for the comedy film Bio-Dome (1996, starring Henry Gibson and Tucker Smallwood).

Several years ago he moved to Houston, Texas. A wine expert for over twenty years, he opened, as managing partner with Lance Fegen, the restaurant Glass Wall in Houston. He now owns and operates the Houston restaurant Pax Americana. [1] 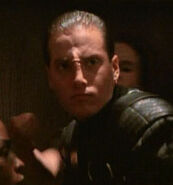 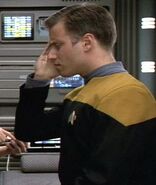 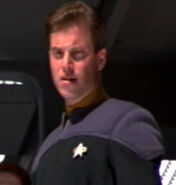 Retrieved from "https://memory-alpha.fandom.com/wiki/Shepard_Ross?oldid=2420306"
Community content is available under CC-BY-NC unless otherwise noted.