Sideburns were a growth of facial hair that was common among humanoids.

While giving Captain Jean-Luc Picard a haircut in 2365, Mr. Mot's finishing touch was a final trim to the Captain's sideburn. (TNG: "Ensign Ro")

While getting a haircut in 2372, Neelix did not want the barber to touch his sideburns, a thought Kes was able to hear telepathically while practicing her abilities with Tuvok. (VOY: "Cold Fire")

Men in Starfleet often styled their sideburns to come to a triangular-point in the 23rd and 24th centuries. (TOS: "The Corbomite Maneuver", et al)

Captain James T. Kirk after his sideburns grew out during his time on Amerind (TOS: "The Paradise Syndrome") 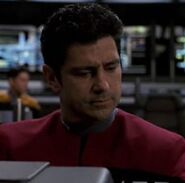 According to Stephen E. Whitfield and Gene Roddenberry's The Making of Star Trek (pp. 286-287), the distinctive pointed sideburns worn by male Starfleet personnel originated as a compromise between Roddenberry's desire to show "futuristic" hairstyles reflective of Star Trek's setting and the actors' objections to the prospect of being required to abandon their favored contemporary styles off camera.

In I Am Spock (p. 28), Leonard Nimoy stated that he had initially suggested pointed sideburns specifically as a Vulcan style for Spock, and quipped that their propagation to other Federation characters was due to Vulcans being "galactic trendsetters." In a 2016 interview with StarTrek.com, Laurel Goodwin further claimed that it was she who had originally suggested the look to Nimoy. [1]

According to Gustav Mendoza, his father, Richard Mendoza, a hairdresser who had worked for Lucille Ball, also helped in creating Spock's signature slanted sideburns. [2]

For Star Trek: The Next Generation and subsequent series, Michael Westmore created several iterations of a document known as the "Side-Burn Bible," or simply "The Bible" for short, illustrating his prescribed technique for makeup artists and hairstylists to artificially create these "pointy sideburns" utilizing crepe wool, which would be trimmed and applied in a manner that blended with performers' natural hair growth. Painting on of makeup was advised against, except to repair holes. (Makeup Man: From Rocky to Star Trek, pp. 204-205)

In an interview with Star Trek: The Magazine, Westmore elaborated that pointed-sideburns were typically a higher quality crepe wool and hand-tied-on lace for principal actors, and a simpler crepe wool for extras. He further noted that when a guest occasionally went on set without their intended sideburns, production chose not to reshoot because of the expense involved. (Star Trek: The Magazine Volume 1, Issue 5, p. 112)

Several examples of performers who had their sideburns added on by the makeup department include: