Start a Wiki
"I've heard of the theoretical possibility of life based on silicon, but silicon-based life would be of an entirely different order."
– James T. Kirk, 2267 ("The Devil in the Dark")

A silicon-based lifeform, also known as a silicon cycle life form, was a corporeal lifeform that used silicon as the basis of its structure and life functions rather than carbon.

In 2151, Captain Jonathan Archer of Enterprise NX-01 tried to convince Commander Charles Tucker III that Starfleet had sent them on a top secret classified mission to a planet to make first contact with a silicon-based lifeform, when Tucker was hallucinating "people coming out of the rock face." Archer told Tucker it was a major breach of security to reveal that information, because T'Pol was the only person granted clearance to speak with them, since they had supposedly made contact with the Vulcans before. (ENT: "Strange New World")

Silicon-based life was thought to be physiologically impossible before the discovery of the Horta of Janus VI in 2267. It was not possible for silicon life to evolve in an oxygen atmosphere. (TOS: "The Devil in the Dark") Later, when the Enterprise landing party was on the surface of the Kalandan outpost, James T. Kirk wondered aloud if it were possible that "the rocks have life", which reminded Sulu of the silicon creatures from Janus VI, to which McCoy reminded that unlike the rocks on the planet they were on, "our instruments recorded that. They were life forms. They registered as life forms." (TOS: "That Which Survives")

In 2364, the USS Enterprise-D discovered the microbrain, an inorganic lifeform found during terraforming of the planet Velara III. (TNG: "Home Soil")

In 2374, a Hirogen hunter boasted to Tom Paris about tracking a silicon-based lifeform through the neutronium mantle of a collapsed star. (VOY: "Prey")

In 2375, it was determined that the Varro generational ship had been exposed to a silicon-based parasite that fed on duranium alloys. (VOY: "The Disease")

Martian insects in the Spaceflight Chronology were described as being silicon-based lifeforms. 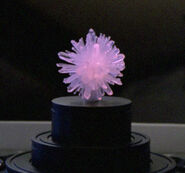 Silicon-based parasite
Add an image to this gallery

Retrieved from "https://memory-alpha.fandom.com/wiki/Silicon-based_lifeform?oldid=2255896"
Community content is available under CC-BY-NC unless otherwise noted.