The vessels used by the Skrreea were of various designs.

The Skrreea were farmers who had been used as laborers and servants for centuries. When they finally were freed sometime before 2370, they gathered any ships they could get their hands on to search for the "Eye of the Universe" that would lead them to the legendary home world of the Skrreea, Kentanna. Three million Skrreea were carried by these ships through the Bajoran wormhole when Haneek discovered it in 2370.

The ship transporting Haneek and her family suffered from a plasma leak in the engine core, causing it to overheat. Likewise, the ship's life support system was "barely" functioning. Once the four passengers were beamed aboard, the ship was docked and diagnosed. Following the arrival of Haneek at Deep Space 9, the station dispatched its runabouts to the Gamma Quadrant to make contact with additional ships. Once these ships were brought through the wormhole, the passengers were confined to their ships, due to the station's comparably minimal capacity. (DS9: "Sanctuary")

Haneek's ship was described in the script as "a ramshackle alien vessel". Later, the script described "Traffic is congested in a way we've never seen: every docking port has a Skrreean ship anchored to it, including the upper and lower pylons… six more ships are lined up just beyond the station, awaiting their turn…"
Information about the studio model can be found here, here, and here. 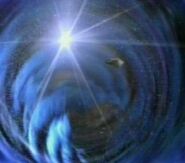 Haneek's ship emerges from the wormhole 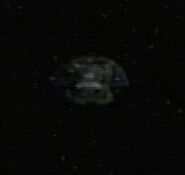 The second Skrreean ship to emerge

Skreean fleet in space surround DS9
Add an image to this gallery
Retrieved from "https://memory-alpha.fandom.com/wiki/Skrreean_ships?oldid=2346027"
Community content is available under CC-BY-NC unless otherwise noted.