The skull was the framework of the head in most animals including humanoids. The skull protected the brain and had sockets for housing the eyes. It was part of the skeletal system.

In 1930, Doctor Leonard McCoy met a homeless man who in his opinion had "good cranial development." (TOS: "The City on the Edge of Forever")

The Novans on Terra Nova used the skulls of Diggers as musical instruments. (ENT: "Terra Nova")

In 2153, Doctor Phlox reviewed a graphic display of a Vulcan skull from a Vulcan infected with trellium. (ENT: "Impulse")

In the mirror universe, Terran Empire MACOs used the skull as a symbol. (ENT: "In a Mirror, Darkly")

Doctor McCoy also kept several alien skulls in his sickbay. (TOS: "The Conscience of the King")

Data and Worf found at least two skeletal systems including the skulls in dysfunctional cryo-stasis chambers aboard the space module in late 2364. (TNG: "The Neutral Zone")

Doctor Noonian Soong kept a Human skull and the skull of a Tyrannosaurus rex in his laboratory on Terlina III. (TNG: "Brothers")

Data's skull was composed of cortenide and duranium. (TNG: "The Chase")

Cranial implants were installed into the skull. When Doctor Julian Bashir said to Odo he thought he knew of these cranial implants, Odo joked he was never able to view into a Cardassian skull. (DS9: "The Wire")

Gallamites had transparent skulls. (DS9: "The Maquis, Part I", "Let He Who Is Without Sin...", "Resurrection", "Penumbra")

In 2371, Joe Carey received severe impact fractures along his cranium after being assaulted by B'Elanna Torres. (VOY: "Parallax")

Both Hirogen and Kazon kept the skulls of slain victims on trophy walls aboard their starships. (VOY: "Initiations", "Hunters", "Prey")

In 2375, Quark had damaged bones in the back of his skull repaired. (DS9: "Take Me Out to the Holosuite")

In an alternative timeline General Picard had a trophy collection made of skulls of his enemies. (PIC: "Penance") 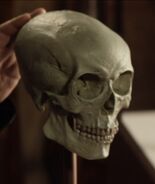 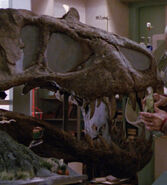 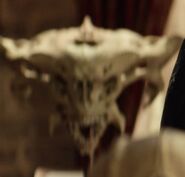