Multiple realities
(covers information from several alternate timelines)
"I don't trust men who smile too much."
– Kor, 2267 ("Errand of Mercy")
"There's something wrong about a man who never smiles..."
– Leonard McCoy discussing Norman, 2268 ("I, Mudd")
"Humans smile with so little provocation."
– Spock, 2268 ("Journey to Babel")
"I don't mean to sound like an old holonovel, but you've got a wonderful smile."
"It wasn't a smile. It was a smirk."
"Oh no, it was a smile. I could check the internal sensors if you'd like."
– Holographic Chakotay and Seven of Nine, 2378 ("Human Error")

A smile was a facial expression that involved the turning up of one's lips, sometimes showing teeth. It could be a sign of happiness, stupidity, or intoxication. The act of forming or expressing a smile was called smiling.

The snowman created by Travis Mayweather was given a final touch by Malcolm Reed when he used a plasma torch to create a smile and eyes. (ENT: "Breaking the Ice") Ensign Travis Mayweather was smiling after he told the senior staff about life aboard a freighter and how his parents wound up with him. (ENT: "Fortunate Son")

In 2267, Kor noticed that Baroner (James T. Kirk) didn't share "the stupid, idiotic smile everyone else seems to be wearing". (TOS: "Errand of Mercy")

In 2268, while pretending to be members of the Führer's Special Documentary Corps, Kirk and Daras told various Ekosians to smile for the camera. (TOS: "Patterns of Force")

In some instances, smiling was considered inappropriate. Following the announcement that President Abraham Lincoln was coming aboard the USS Enterprise, Captain Kirk threatened to "have the hide of the first man that so much as smiles" (at the absurdity of the situation). (TOS: "The Savage Curtain") 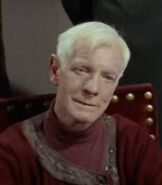 Seven practicing a smile
Add an image to this gallery

Retrieved from "https://memory-alpha.fandom.com/wiki/Smile?oldid=2534967"
Community content is available under CC-BY-NC unless otherwise noted.