A soliton wave was a confined energy phenomenon that traveled at faster-than-light speeds, with potential applications in spacecraft propulsion and subspace communication.

During the mid-24th century, Doctor Ja'Dar of Bilana III investigated soliton waves as a possible alternative to warp drive. The USS Enterprise-D attended the first field test of this technology in 2368.

According to Ja'Dar's presentation of the soliton wave rider experiment: 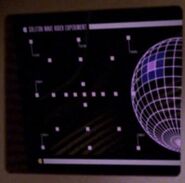 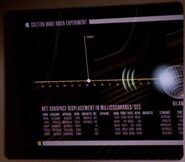 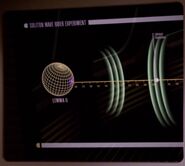 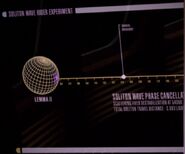 Although the test began promisingly, displaying a 98% energy transfer efficiency of the soliton wave that was 450% more efficient than the Enterprise's own warp engines, the wave unexpectedly destabilized and manifested a subspace distortion that destroyed the test ship and damaged the Enterprise. Dr. Ja'Dar believed that a transient power imbalance was responsible.

The Enterprise subsequently found that the wave was accelerating towards Lemma II, gaining energy in the process. It was estimated that by the time the wave arrived it would contain enough energy to destroy most of the planet. The wave had grown too powerful for the Lemma II facility to dissipate, but the Enterprise was able to disrupt the wave by detonating five photon torpedoes directly in front of it. (TNG: "New Ground")

Communication through the Bajoran wormhole

In 2371, the Cardassian scientists Ulani Belor and Gilora Rejal intended to test various types soliton pulses as the carrier wave source to use to cut through the interference on the inside of the Bajoran wormhole in order for the wormhole relay station to function. They believed that one of the pulses "should maintain the required signal integrity," and unlike the Federation's similar attempts in 2370, the Cardassians believed that they worked out the phase variance problems in the transceiver coils, that the first test experienced. (DS9: "Destiny")

The Star Trek: Section 31 novel Cloak established that the use of soliton waves for starship propulsion had been proposed as early as 2268.

Retrieved from "https://memory-alpha.fandom.com/wiki/Soliton_wave?oldid=2565309"
Community content is available under CC-BY-NC unless otherwise noted.