Spock's World is a Pocket TOS novel written by Diane Duane. Published by Pocket Books, it was first released in hardback in September 1988.

From the book jacket
"I am Spock… I hold the rank of Commander in the Starfleet of the United Federation of Planets; I serve as First Officer of the Starship Enterprise. I am the son of two worlds. Of Earth, whose history is an open book… and of Vulcan, whose secrets have lain hidden beneath its burning sands… Until now…"..

It is the twenty-third century. On the planet Vulcan, a crisis of unprecedented proportion has caused the convocation of the planet's ruling council – and summoned the USS Enterprise from halfway across the galaxy, to bring Vulcan's most famous son home in its hour of need.

As Commander Spock, his father Sarek, and Captain James T. Kirk struggle to preserve Vulcan's future, the planet's innermost secrets are laid before us, from its beginnings millions of years ago to its savage prehistory, from merciless tribal warfare to medieval court intrigue, from the exploration of space to the the development of cthia – the ruling ethic of logic. And Spock – torn between his duty to Starfleet and the unbreakable ties that bind him to Vulcan – must find a way to reconcile both his own inner conflict and the external dilemma his planet faces… lest the Federation itself be ripped asunder.

The USS Enterprise is summoned to Vulcan to join the debates on secession. James Kirk, Spock, and Dr. Leonard McCoy are all called upon to present their arguments, as is Sarek, Spock's father. We also look into several episodes from Vulcan's past that deal with the development of modern Vulcan civilization and thought.

On Vulcan, a ruling group has voted to consider seceding from the Federation of Planets. This creates conflict for Spock and Sarek, who, if the movement succeeds, can choose to remain on Vulcan and break off all contact with Earth and the Federation, or stay on Earth but be cast out from their family and disgraced.

The main event that occurs is a referendum where Vulcan attempts to decide whether to secede from the United Federation of Planets. Political figures and dignitaries are invited to offer speeches to persuade the planet. Sarek has to speak on behalf of the government and state why Vulcan should leave. Sarek claims that it is not Earth that is a bad influence on Vulcan, it is Vulcan that is a bad influence on Earth. Sarek does not want Vulcan to secede, however, because then he would have to leave Vulcan with his wife, Lady Amanda. Kirk, Spock, and McCoy all speak on the behalf of the United Federation of Planets. McCoy proves to be a particularly good orator.

The anti-Earth public sentiment was created by T'Pring in an attempt to revenge herself on Kirk and Spock for the death of her husband, Stonn.

T'Pau, the respected Vulcan matriarch, is initially supportive of the secession movement. When she discovers that it was engineered by a vengeful T'Pring, however, T'Pau recants and on her deathbed makes Lady Amanda the new matriarch of the house.

In the end, Vulcan decides not to secede.

"The spear in the Other's heart is the spear in your own – you are he."

"Vulcan has no moon," various Vulcans have been heard to remark: accurate as always, when speaking scientifically. "Damn right it doesn't," at least one Terran has responded: "it has a nightmare."

"My name is Leonard Edward McCoy. […] I hold the rank of commander in the Starfleet of the United Federation of Planets my position is chief medical officer of the Starship Enterprise. And as regards the question of the secession of Vulcan, my position is, hell no!" 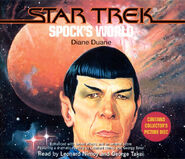 Audiobook cover, CD edition
Add an image to this gallery

First appeared in The Wounded Sky.

UNSS Amity
Earth United Nations ship that made contact with a damaged Vulcan vessel in the mid 21st century.

This makes reference to the events of Strangers from the Sky.

This would be the equivalent of a "geosynchronous orbit" around Earth; "Hephaistos" being the Greek word for the Roman "Vulcan".

Gelevesh
Ancient Vulcan asteroid prospector/miner ship.
Rasha
Ancient Vulcan asteroid prospector/miner ship with eleven crewmembers that was destroyed.
B'hiva
Pelasht/Phelsh't
Ancient Vulcan fortress with a spring.
Sulamid
A race that has octocameral brains, with eight separate personalities.
Their race has twelve sexes, all of whom insist they're male, especially the ones that bear children.
A Sulamid has been described as looking like "a bundle of bright purple tentacles about six to seven feet high. The tentacles change color more or less constantly, and the bundle is topped off with a sheaf of pink-stalked and tentacled eyes with triangular pupils and a purplish, "bloodshot" look." When they speak, it sometimes seems to say things that don't seem to make much sense. The tone of their speech (and its content) could possibly be taken to suggest that they are somewhat prescient.

T'Khut
Sister planet of Vulcan. Vulcan for "the Watcher"; referred to by Human astronomers as Charis.
Underliers
Vulcan equivalent of whales.
USS Swiftsure
Starship
Urekh
Ancient Vulcan asteroid prospector/miner ship.
Vulcan
Located around 40 Eridani A, Vulcan became a desert world shortly after hominid life developed, the result of a solar flare which boiled away most of the oceans.
"The Wanderer"
First Vulcan to invent speech.

Retrieved from "https://memory-alpha.fandom.com/wiki/Spock%27s_World?oldid=2452204"
Community content is available under CC-BY-NC unless otherwise noted.