Stained glass windows were a form of art on Earth, originally used to visualize biblical writings for those that couldn't read.

The Human settlers brought to Terralysium by the red angel in 2053 created windows to honor their cobbled-together religious iconography, including Christianity, Judaism, Hinduism, Shinto and Wicca. In 2257, Commander Michael Burnham would identify the windows as lasting over 200 years. (DIS: "New Eden") 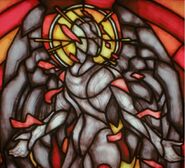 The "First Saved" of New Eden, depicted in stained glass
Add an image to this gallery

Retrieved from "https://memory-alpha.fandom.com/wiki/Stained_glass?oldid=2298567"
Community content is available under CC-BY-NC unless otherwise noted.