First released in 2013, it was re-released over a year later in the UK in slimmer packaging. To date the set has also been released in a number of Region A territories including Brazil, Hong Kong, and Taiwan but not in Japan or in North America. The Hong Kong release, unlike other areas, also includes a third disc with the 3D version of the film. 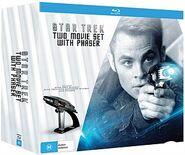