Star Trek: Communicator was the main magazine publication of the Official Star Trek Fan Club, and was a progression from the earlier Star Trek: The Official Fan Club Magazine. Published bimonthly, the by now semi-professional (full color) magazine debuted with issue "100", a continuation of the issue numbering from its predecessor.

On 9 February 2001, Decipher purchased the assets of FANtastic Media, including the fan club, and continued publication of Communicator.

In 2005, the company announced the cancellation of the magazine after issue 155, citing complaints about subscription mailing delays and the threat of lawsuits, which was attributed to the financial collapse of the card gaming industry, the principal source of Decipher's revenues. [1]

Attempts to revive the publication by creator/club founder Dan Madsen and its managing editor Larry Nemecek have, to date, proven unsuccessful.

Note: a concerted effort was made to group articles and interviews that shared similarities into sections, though both section contents as well as section headings changed several times over the publication's run. A typical subdivision was:
Dossier
Readers' letters
Briefing
News on upcoming episodes, information on Trek actors, sets, behind-the-scenes, etc.
Profile
Information and interviews with actors and actresses in Trek
Tech
Specifications of ships and stations, "Treknology"
Media
Star Trek gaming
Quark's Bazaar
Catalog of items for sale from the fan club

The Decipher version of the magazine has seen an internationally released variant in the form of the edited Italian language Star Trek: La Rivista Ufficiale, which was published between 1997 and 2000 by Fanucci Editore. From 2000 onward, publication of the magazine was taken over by the official Italian Star Trek fanclub, STIC, with a restarted numbering as (Inside) Star Trek magazine.

A second international edition concerned the edited German-language Trekworld publication from the "Star Trek Central Europe" (STCE) fanclub, the later "Offizieller Star Trek Fan Club" (OSTFC) as of 2000. [2] Between 1986 and 1999, the fanclub released 64 issues under the auspices of editor-in-chief and fanclub president Dirk Bartholomä, starting out very much like Communicator's predecessor The Official Fan Club Magazine, and likewise transitioning into a FANtastic Media "semi-pro" version-style format over the course of its existence. [3] This was unlike its younger Italian counterpart, which had been "semi-pro" from its start.

Even though contents were lifted from the American source publication(s) in translation, for both foreign-language versions applied that neither of them were quite clones thereof, as they also contained original Italian/German-initiated content.

A number of "limited edition" cold-cast resin Star Trek starship miniatures, measuring from eight to twelve inches in length, were produced in 1996 by Legends in 3 Dimensions for the fan club and sold through mail order around the turn of the millennium. Advertised as fanclub exclusives and retailed through issues of the Star Trek Communicator magazine, these replicas were also sold at Las Vegas' Star Trek: The Experience, with editions limited to 2,500 models per ship.

A small pewter miniature of the USS Enterprise-E was also retailed by mail order through Star Trek Communicator magazines during the same era. Produced by Rawcliffe in 1997, the miniature was a homage to the legendary gaming miniatures released by former licensor FASA over a decade before, and was duly executed in (approximately) 1:3900 game scale.

The Captain's yacht Cousteau miniature was produced by an unknown manufacturer and executed in PVC rather than cold-cast resin, and like the T'Plana-Hath, was designed and mastered by John Eaves. Limited to 5000 pieces, the Cousteau model came with a stand that resembled the vessel's dedication plaque.

As with the Playmates Toys version of the ship, the upright position of the yacht's nacelle pylons (while in flight mode) was changed to a downward cant by Star Trek: Insurrection's producers after the products had been mastered, resulting in discrepancies between the onscreen appearance of the ship and its contemporary miniature replicas. Eaves also commented that the ship's deflector array had undergone some late modifications for use in the film. [4] 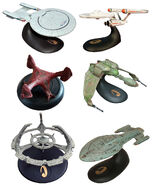 Legends in 3 Dimensions' starships and station, sold through Communicator