A number of "limited edition" cold-cast resin Star Trek starship miniatures, measuring from eight to twelve inches in length, were produced in 1996 by Legends in 3 Dimensions for the fan club and sold through mail order around the turn of the millennium. Advertised as fanclub exclusives and made available through issues of Star Trek Communicator magazine, these replicas were also retailed at Las Vegas' Star Trek: The Experience, with editions limited to 2,500 models per ship.

A small pewter miniature of the USS Enterprise-E was also retailed by mail order through Star Trek Communicator magazines during the same era. Produced by Rawcliffe in 1997, the miniature was a homage to the legendary gaming miniatures, released by their former licensor FASA over a decade before, and duly executed in (approximately) 1:3900 game scale.

The separate Captain's yacht Cousteau exclusive was produced by an unknown manufacturer and executed in PVC rather than cold-cast resin, but was also designed and mastered by John Eaves. Limited to 5000 pieces, the Cousteau model came with a dedication plaque stand. 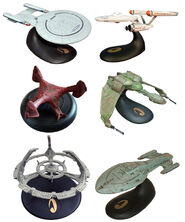 Legends in 3 Dimensions' starships and station, sold through Communicator magazine