The set also saw a Region 2 release in Italy as that territory had not been served with the recent Region 2 Star Trek: Deep Space Nine - The Full Journey reissues. Germany on the other had actually also been served with that reissue in 2015 – as had Denmark (serving the whole of Scandinavia, Iceland excepted) for that matter, albeit on a limited scale in its case – but chose to re-release the set nonetheless under the new title as well. Unlike the Danish and German sets, the Italian box carried language adapted text imprints.

The Region 1 and 2 sets spread its discs across three Epic Pack plastic snapcases – two holding three seasons, whereas the third one held the last season.

The inside of the Region 2 box 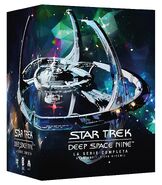 Italian Region 2 box set
Add an image to this gallery

An Australian Region 4 release – featuring all of the individual slimline season releases placed on a card tray in a soft-board lid closed box – had actually already preceded the Region 1 release by nearly eight years, though it was at that time often marketed on several retailer sites, including Amazon.com.au, under various different Complete names, despite the correct title on the box packaging.

The episodes on the discs, and their arrangement among them, are identical to the DS9 season box-sets. Please refer to the following pages for the discs' episodes and special features arrangement.

Retrieved from "https://memory-alpha.fandom.com/wiki/Star_Trek:_Deep_Space_Nine_-_The_Complete_Series?oldid=2529691"
Community content is available under CC-BY-NC unless otherwise noted.