Star Trek: Discovery The Official Starships Collection is a monthly British partwork magazine and product line that premiered on 31 January 2018 and is published by Eaglemoss Collections under its Hero Collector imprint.

A sister publication of the Star Trek: The Official Starships Collection, Build The USS Enterprise NCC-1701-D, and Star Trek Online Starships Collection partworks, it is authorized and licensed by CBS Consumer Products, debuted simultaneously in the US and the UK, and is marketed to a number of countries worldwide.

Products are available through subscription (where applicable[1]), through the company's international webshops, and from many other retailers, including Diamond Comic Distributors, Anovos, and ThinkGeek/GameStop. [10] [11]

Each standard issue includes a (roughly) six to ten inch-long (150 to 240 mm-long) hand-painted [2] scaled replica of a starship from the Star Trek: Discovery series. Cast in ABS and die-cast metal, a number of starship designs have been reproduced here (as miniatures) for the first time by any manufacturer. Available separately, larger Special Edition starship models, metallic resin dedication plaques, dedicated magazine binders, and a figurine have been produced. Gift premiums have also been released to subscribers.

Ben Robinson, the project's senior manager, and his team, under the supervision of John Ainsworth, utilize the original CGI studio models provided by Pixomondo for reference, once they have been approved by CBS Studios and Secret Hideout, the show's primary production companies, and the VFX team. [12] [13] [14] [15]

Robinson and Ainsworth have their longtime Official Starships Collection associate Fabio Passaro convert these models into LightWave 3D, Eaglemoss' software package of choice, as the production-used models are created in Autodesk Maya and must be re-texturized, rescaled, and modified for 3D printing. Passaro then converts these 3D models into CAD files. [16] [17] [3]

At the Holinail Group, Eaglemoss' manufacturing partner in China, [18] these files are converted into the CAD format used by the factory and tooling masters are created. Two-dimensional renders of the ships are frequently used for the publication's illustrations by its editors in the UK, and each sixteen-page A5 format magazine (measuring 168 × 217 mm, [4] half the size of those of the preceding Official Starships Collection) fits within the printed cardboard boxes that the models are presented in.

Some of the magazine content was published by Eaglemoss under the Hero Collector imprint, and was distributed by Penguin Random House in two hardcover mass-market reference books from the Star Trek: Shipyards series, within the Starfleet Ships 2151-2293 and The Klingon Fleet volumes. [19]

Transition to the Star Trek Universe: The Official Starships Collection

In July 2020, the company announced that this product line (and subscriptions) would be suspended after the release of (numbered) issue 33, due to production delays with the third season of the show and the resulting lack of new CG assets.

In October 2020, Eaglemoss further reported that it had plans to release more starship models from DIS in a future starships line, combined with ships from Star Trek: Picard and Star Trek: Strange New Worlds.

It was subsequently named the Star Trek Universe: The Official Starships Collection which debuted in March 2021. [21] The company has revealed a number of forthcoming 32nd century Federation starship models from the third season of DIS for the new partwork, which supersedes this line. [22] Subscription services for the original line were terminated, and customers who wanted to continue with their collection had to take out a new subscription on the Universe collection.

Larger XL Edition models featuring starships from DIS will continue to be released within the Star Trek: The Official Starships Collection.

The USS Glenn, the line's sole convention-exclusive registry variant model, was produced in a limited edition of 500 units (worldwide)[16] and was available for purchase at the 2018 Official Star Trek Convention, New York Comic Con, and the Destination Star Trek Birmingham convention. Later in the year, a small number were also briefly made available to the public by Eaglemoss' UK and US webshops. Each ship was retailed with the USS Discovery's magazine and stand.

Considerably larger than the standard releases, Special Editions are also available to the general public from company webshops and other retailers, and are not automatically sent to subscribers.

Before it was released as a 215 mm-long model with issue 12 of this partwork (see above), a 259 mm-long "XL Edition" model of the USS Enterprise (as it was seen in DIS) debuted in the first starship collection. Larger XL Edition models of the USS Discovery and the USS Shenzhou were also released in that collection, and a refitted XL USS Discovery-A is planned. 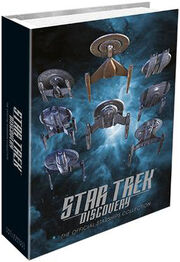 "Mini-binders" (measuring 167 × 244 × 45 mm) store ten of the magazines and are available to US subscribers but have not been retailed to the general public through the company's webshops, despite the company's stated plans at the partwork's debut.

One binder however, was provided as a free bonus gift with the third shipment to early subscribers, following the below-mentioned unexpected delays with the release of the first few starships and gift premiums. [18]

Additional binders were also automatically sent to some European subscribers in 2020, close to the conclusion of the Collection's release in the region. [19]

Appearing in promotional materials, six more Klingon starship designs were identified as upcoming models but were not, in the end, released as issues of this partwork.

Regarding the prospective release of these ships in the Star Trek Universe: The Official Starships Collection partwork, Ben Robinson revealed, "The plan is definitely to do more. To be honest, these Klingon ships don’t sell brilliantly so we’ll work our way through the Picard, Disco and SNW ships first. Starfleet and lead ships sell better so are always the priority but with any luck we’ll circle back round." [28] 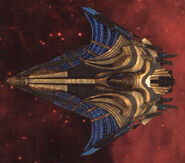 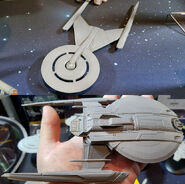 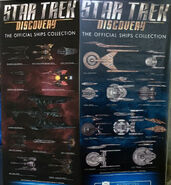 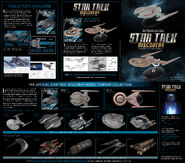