A simple collection, it consisted for the shrink-wrapped Region 1 release of the individual season releases placed on a card tray, whereas the UK and German Region 2 versions on the other hand, had their individual seasons placed in especially designed boxes, a hardboard one for the UK release and a softboard for the German one. The German box had a T-shirt, poster and an extra booklet included as bonus gifts. 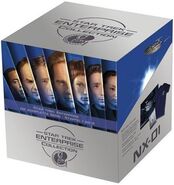 The episodes on the discs, and their arrangement among them, are identical to the season box-sets. Please refer to the following entries for the discs' episode and special features arrangement,