From the book jacket
From the deepest, darkest reaches of space came the greatest threat the Federation had ever faced: the Borg. Half organic/half mechanical, the Borg were relentless and bent on conquering and "assimilating" all intelligent life; a single Borg vessel destroyed thirty-nine Federation starships, decimating Starfleet.

Stronger and more dangerous than ever, they are ready to launch a new attack against the Federation, one that threatens its past… its present… and its future.

Only the courage and determination of Captain Jean-Luc Picard and his crew can prevent the Borg from striking at the heart of the Federation and Earth. 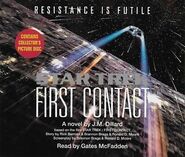 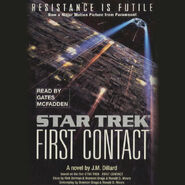 Retrieved from "https://memory-alpha.fandom.com/wiki/Star_Trek:_First_Contact_(novel)?oldid=2452121"
Community content is available under CC-BY-NC unless otherwise noted.