Star Trek: Lower Decks is the ninth main series set in the Star Trek universe, the tenth including the companion series Star Trek: Short Treks, and the twelfth Star Trek series overall. It is the second series to be entirely animated, after Star Trek: The Animated Series, with episodes running half an hour, and the third series to have animated episodes, after Short Treks. Lower Decks is the first original animated series commissioned by CBS All Access, as well as the first produced by the new CBS animation arm, CBS Eye Animation Productions, and was announced in October 2018, with All Access committing to a two-season order. [1]

Created by Mike McMahan, the series is an adult animation comedy produced in association with Titmouse, Inc. and forms part of Alex Kurtzman's five-year deal with CBS to expand the Star Trek franchise. Lower Decks focuses on "the support crew serving on one of Starfleet's least important ships." [2]

The show takes place aboard the California-class USS Cerritos on the "lower decks". [3] The show's time period is described as the Star Trek: The Next Generation-era, more specifically 2380, after Star Trek Nemesis. [4] [5]

The first season was nominated for the NAACP Image Award for Outstanding Animated Series. [7]

In April 2021 it was announced that Lower Decks had been renewed for a third season. [8]

McMahan has acknowledged that some fans have referred to the four leading characters as "the warp core four," though the production team's shorthand for them is "The Lower Deckers." [9]

↑ John Van Citters has chosen "LDS" as the series' official abbreviation, while also alluding to it being a reference to Kirk's line about LSD in Star Trek IV: The Voyage Home. [10] This is consistent with the three letter abbreviations for other series, though no "official" abbreviations have been given for Star Trek: Short Treks, After Trek, or The Ready Room. MA will use the abbreviation "LD" for Lower Decks to remain consistent with using the first letter in titles with more than one word after Star Trek.

On 18 January 2022 it was announced that Lower Decks had been renewed for a fourth season.

Poster for the in-universe movie Crisis Point: The Rise of Vindicta from the episode "Crisis Point" 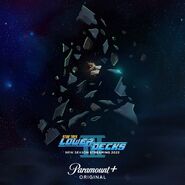 Eaglemoss/Hero Collector revealed that the USS Cerritos, USS Titan, and USS Vancouver have been manufactured as starship miniatures and confirmed that its Lower Decks ships line would debut at retail in January 2022. [11] [12]

These three starships are also explored in the second edition of the company's Star Trek: Shipyards - Starfleet Ships 2294 to the Future reference book, which was released in August 2021. [13]

On 13 July 2021, ViacomCBS Consumer Products and Playmates Toys jointly announced that the latter had acquired new licensing for "action figures, vehicles and ships, role play and other toy categories", and slated the first of these products for retail release in 2022. Among other Star Trek series and films, this licensing encompasses Lower Decks, Star Trek: Discovery, Star Trek: Picard, and Star Trek: Prodigy. [14]

Star Trek: Lower Decks has been nominated for one Emmy Award, in the category of "Outstanding Sound Editing For A Comedy Or Drama Series (Half-Hour) And Animation".