The Star Trek: Original Motion Picture Collection is a Region A Blu-ray Disc box collection featuring the six Original Series films. Each film, based on the theatrical cut in each instance, has been digitally remastered in high-definition, and presented in 7.1 Dolby TrueHD sound. It was in this collection that the Blu-ray versions were for the first time released, before the films saw subsequent individual releases.

This marks the first time that Star Trek: The Motion Picture has been released in its theatrical format since VHS. Star Trek II: The Wrath of Khan required extensive restoration to feature in this release – director Nicholas Meyer noting that the original negative "was in terrible shape". This also marks the first time that Star Trek VI: The Undiscovered Country has been released in its original theatrical aspect ratio of 2.35:1 and Theatrical Cut. Each film includes an embedded Library Computer – a trivia feature using Blu-ray's Java function.

Each disc came packaged within in its own Viva Elite slim case. The hardboard slipcase box itself was protected by a transparent plastic slipcover on which the texts were imprinted, whereas the lenticular, holographic picture was imprinted on the box. The Canadian English/French bilingual release, was issued with a slightly re-designed slipcover. Discounting other foreign language imprints, there is at least one variant Region A English-language slipcover known to circulate. [1] While the other Region B releases adhered to the format as issued in Region A, the UK release differed in this respect that it dispensed with the plastic slipcover, instead having all the texts imprinted on the box, as well as lacking the holographic character of the box picture. [2] Initially, the UK release was being solicited as having all seven individual discs being packaged within one Viva Elite multi-disc case.

Region A saw a reissue in February 2016, now with all discs packaged within one standard Viva Elite multi-disc case featuring new cover art, and with the bonus disc left out. In order to capitalize on the fervor surrounding Star Trek's 50th anniversary, issues from 14 June onward (ASIN B01DKLQMNY) were additionally packaged in a carton slipcase where the gold embossed event was prominently featured.

Region A USA Original release back 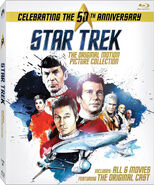 While in some cases marketed as region-restricted, this release is in actuality region-free as this has increasingly become commonplace for the Blu-ray disc format. [3]

With the exception of the Motion Picture, which, apart from the deleted scenes, only included newly made special features, all other films have also carried over the special features originally made for the 2002-2005 "Special Edition" DVD collection, albeit in standard definition, alongside the newly made high definition ones. Somewhat ironically, the near-concurrent DVD counterpart of the collection does not have the archival features included on its release, only the newly made ones – an intentional industry policy to favor the Blu-ray home video format.

This particular release is one of the few individual Star Trek releases followed by the professional industry site The Numbers and for which domestic US home video format sales are known; The Numbers has reported that by June 2020 domestic sales had been realized of US$15 million for both this and its DVD counterpart releases. [4]