Star Trek: Picard is the eighth main series set in the Star Trek universe, the ninth including the companion series Star Trek: Short Treks, and the eleventh Star Trek series overall. Picard is produced by CBS Television Studios and stars Patrick Stewart, reprising the role of Jean-Luc Picard from Star Trek: The Next Generation. [1] The new series is set twenty years after the events of Star Trek Nemesis, [2] dealing with "the new chapter in Picard's life." Stewart has hinted that Picard may not be a captain in the series, and may be "a very different individual" from when he was last seen. [3]

The series forms part of Alex Kurtzman's five-year deal with CBS to expand the Star Trek franchise, and airs on CBS All Access. [4] Kurtzman serves as executive producer on the series along with Stewart, as well as James Duff, Akiva Goldsman, Michael Chabon, Trevor Roth, Heather Kadin, and Rod Roddenberry. In addition, Aaron Baiers serves as co-executive producer. [5] Writer Kirsten Beyer devised the concept for the series, [6] and she features as part of the writing staff alongside Kurtzman, Duff, Goldsman, and Chabon. Chabon serves as the first season's showrunner. [7]

Work in the writers' room began in September 2018, and an image of the staff with Stewart was shared by the actor at the end of that month. [12] This image featured Stewart, Duff, Goldsman, Beyer, Chabon and also Diandra Pendleton-Thompson, who had not been previously announced as one of the series' writers. Production was expected to begin in April 2019, according to Kurtzman, [13] and the series is filmed in California. [14] In December 2018, CBS Corporation Chief Creative Officer David Nevins stated that CBS expected the series to launch late in 2019. [15]

On 22 April 2019, production on the show began. [21] The Star Trek: Picard production is based out of Santa Clarita Studios (SCS). SCS is an independent studio production facility based in Santa Clarita, California, 35 miles north of Hollywood. Although Star Trek was returning to Hollywood, like all of the previous series save Star Trek: Discovery, it is not being shot at Star Trek's previous home of Paramount Studios. [22] Paramount lost not only its television division, but the entire franchise as well, when the former Viacom was split in late 2005 into the new Viacom (Paramount's holding company at the time Picard began filming) and the CBS Corporation, with Star Trek ownership passing over to the latter. (The two corporations re-merged to form ViacomCBS in December 2019.)

Shortly before filming began, Michael Chabon was appointed as showrunner.'I Heard Patrick's Voice in My Head': Michael Chabon on Making 'Picard' and Being a Fanboy at Rolling Stone However, CBS did not announce Chabon's position until 27 June 2019. [23]

On 13 May 2019, the announcement was made that Amazon Prime had acquired the international streaming rights for the new series, each episode to be aired 24 hours after its American premiere on CBS All Access. [24] [25] Stewart confirmed the news the same day on his Twitter account. [26]

On 15 May 2019, the first seven-second teaser, revealing the new show's title and logo, was released. [27] This was followed on 23 May by the first live-action teaser trailer in both the CBS All Access and Amazon Prime Video variants. [28] [29] The voice of the teaser trailer's female narrator was not from any of the then-known contracted actresses, but rather from voice actress Merrin Dungey. [30] It was after the series had premiered, that it became apparent that Dungey was also given the guest-starring part of Richter.

Additionally, the Star Trek: Picard Movie & TV Collection Blu-ray Disc set (which incidentally, included the exclusive 16-page Star Trek: Sky's the Limit comic book, likewise from IDW. [45]) saw an October/November release as an appetizer. [46] The majority of the titles included in the collection contained events referenced to in the series, which held especially true for TNG: "The Best of Both Worlds", Star Trek: First Contact and Star Trek Nemesis. 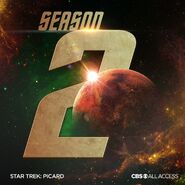 CherryTree previewed a prototype of its Borg Cube ATX Limited Collector's Edition computer in July 2019, [51] and the final version reached retail in January 2020. [52] Smaller ITX builds of this cube debuted in June 2020.

In June 2019, Eaglemoss/Hero Collector's project manager Ben Robinson reconfirmed that the company will manufacture starship miniatures from the series, and later indicated that the ships will be about 150 to 250 mm in length, similar to its DIS starships partwork. The first four sets of CG models from the show's starship assets were received in March 2020, and the first product, a model of La Sirena, is slated to reach retail approximately one year later. [53] In July 2020, the USS Zheng He, Seven of Nine's ship, and the series' Romulan warbird were added to the list of forthcoming models. [54] 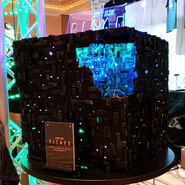 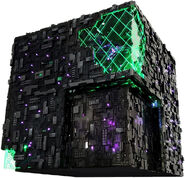 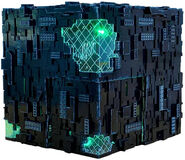 Retrieved from "https://memory-alpha.fandom.com/wiki/Star_Trek:_Picard?oldid=2536514"
Community content is available under CC-BY-NC unless otherwise noted.