Note: Annotations are all from the co-editor Adam Lebowitz from Star Trek: The Magazine Volume 2, Issue 9, p. 104.

"January (...) was conceived after looking at photos of construction workers sitting atop massive girders whilst building New York City."

"Recognition of famous structures through silhouette and attention to an object's bold shapes are what drives May and July, which feature the hull of a ship under construction and the harsh, convoluted angles of the Borg Unicomplex."

"June is clearly a STAR TREK version of photographs we've all seen in which the tail lights of city traffic are streaked along the direction of travel (in this case, the nacelle lights of starships during a busy moment at Spacedock)."

"A breathtaking view of what Ansel Adams' camera might see in the 24th century."

"October is based on an actual photograph I took of the filming model of the USS EnterpriseNCC-1701. While working on the Director's Edition DVD of Star Trek: The Motion Picture, the model was on hand at Foundation Imaging, and many of us took the opportunity to grab some photos of living STAR TREK history. On one occasion I rolled out a high-powered film light and placed it at an extreme angle, hoping to catch some dramatic shots of the model. I fell in love with one particular angle that highlighted the way various curves intersected at a central point, and we decided to recreate this with our CG model for the calendar."

"While a bit nervous about testing uncharted waters with a mass-market product, both Robert and I were very pleased with the final result. As to be expected, there are a few images we'd gladly do over again had we the opportunity, but we're extremely proud that most of the calendar is exactly what we wanted it to be: a different perspective of the STAR TREK universe. Is it more artistic? That's up to the personal taste of each individual viewer. Public reaction to the 2002 calendar has certainly been mixed. Some people preferred the standard, well-lit-in-space approach of the original calendar, while others have found this new look to be bold and refreshing. What has perhaps surprised and delighted us the most is that almost everyone we've spoken to has a different favorite (last year's edition sparked the same top two or three). One online reviewer claims to have torn the Work Bee image out and used it to wrap fish, while another has cried its praise as the best of the bunch. Several people have begged me for a frameable poster of the centerfold, but others have stated it would have been a beautiful image had it only been in color! This discussion (which has grown quite heated) over whether the 2002 "Ships of the Line" calendar is a masterpiece or a candidate for the litter box is perhaps the most satisfying aspect of the whole project; if it inspires passion and debate, it may truly be a work of art after all." (Star Trek: The Magazine Volume 2, Issue 9, p. 104) 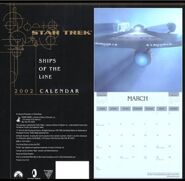 Retrieved from "https://memory-alpha.fandom.com/wiki/Star_Trek:_Ships_of_the_Line_(2002)?oldid=2439151"
Community content is available under CC-BY-NC unless otherwise noted.