The Ships of the Line calendar for 2004 featured images for each month, some newly created for the calendar, some from episodes or movies. Events depicted in this calendar are not considered to be canon.

Publisher's description
Ships of the Line is the best-seller in this extraordinary line of calendars, and features thirteen spectacular, awe-inspiring images created exclusively for this calendar. Included are ships from the three hundred years of Starfleet history. Plus, the unique horizontal format opens up the sweeping vistas of this peerless artwork. The exclusive art and large format is what has made this calendar the number one seller year after year, appealing to all Star Trek fans.

The 2004 calendar featured the following images: 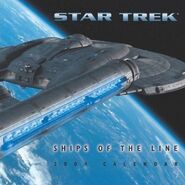 Retrieved from "https://memory-alpha.fandom.com/wiki/Star_Trek:_Ships_of_the_Line_(2004)?oldid=2439153"
Community content is available under CC-BY-NC unless otherwise noted.