Blurb
The Ships of the Line 2005 Calendar is the only place where passionate fans can find fourteen original pieces of Star Trek art. Each month, this one-of-a-kind calendar features a spectacular, awe-inspiring image of one of the most fascinating parts of the Star Trek vision: the ships of the line. Created exclusively for this calendar by Star Trek design experts at Paramount and presented in a unique horizontal format, these images make up a truly unrivaled calendar. This is a favorite not only among fans, but also among collectors for unparalleled artistry and originality evident on each monthly spread. 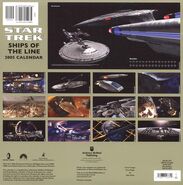 Retrieved from "https://memory-alpha.fandom.com/wiki/Star_Trek:_Ships_of_the_Line_(2005)?oldid=2425131"
Community content is available under CC-BY-NC unless otherwise noted.