Blurb
Featuring fourteen pieces of Star Trek art not available anywhere else and created exclusively for this calendar, the Star Trek Ships of the Line 2007 Calendar will continue to delight and amaze fans with its stunning, unique renditions of one of the most fascinating parts of the Star Trek universe. Commemorating the twentieth anniversary of Star Trek: The Next Generation, this edition of the Ships of the Line calendar will be sought out by fans and collectors alike.

All images except September's are done in CGI. "Captain's Arrival" is done by hand.,

The February, centerfold, and September images did not appear in the 2014 edition of the Ships of the Line. For that edition, several of the included images were re-named: 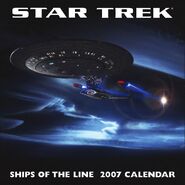 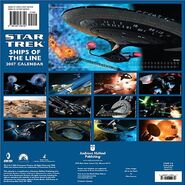