Publisher's description
Featuring fourteen pieces of Star Trek art not available anywhere else and created exclusively for this calendar, the Star Trek Ships of the Line 2009 Calendar will continue to delight and amaze fans. Displaying remarkable artistry in its unique, dramatic depictions of Star Trek's ships, this calendar is highly anticipated by Star Trek fans each year. 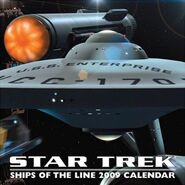 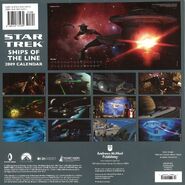 Retrieved from "https://memory-alpha.fandom.com/wiki/Star_Trek:_Ships_of_the_Line_(2009)?oldid=2425125"
Community content is available under CC-BY-NC unless otherwise noted.